Royal Challengers Bangalore: Indian Premier League is a cricket tournament being organised by the Board of Control for Cricket in India (BCCI) and backed by the International Cricket Council (ICC). For the inaugural tournament held in April–June 2008, the BCCI had finalised a list of 8 teams who will be participating in the tournament. The teams representing 8 different cities of India, including Bangalore, were put up on auction in Mumbai on 20 February 2008 and the Bangalore team was won by Vijay Mallya, who paid US$111.6 million for it. This was the second highest bid for a team in the IPL, next only to Mukesh Ambani's Reliance Industries' bid of $111.9 million for the Mumbai team. Bollywood actresses Katrina Kaif and Deepika Padukone, and Sandalwood film stars Ramya and Puneeth Rajkumar are the brand ambassadors of the team.

The total 9 IPL franchises have confirmed their initial squads for Pepsi IPL 2013. 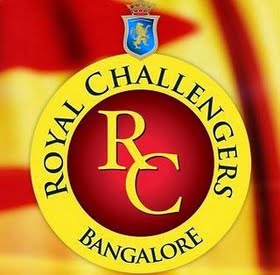 Total no of Players 32

No. of Indian Players 22

No. of Overseas Players 10