Pakistan prevail in a tight finish in Bangalore T20I

Pakistan clinched a thrilling victory over India in the first T20I at a packed M Chinnaswamy Stadium in Bangalore. Chasing just 134, Pakistan were rocked by a triple blow early in their innings by debutant Bhuvneshwar Kumar who swung the ball both the ways for terrific returns of 4-0-9-3.

Pakistan clinched a thrilling victory over India in the first T20I at a packed M Chinnaswamy Stadium in Bangalore. Chasing just 134, Pakistan were rocked by a triple blow early in their innings by debutant Bhuvneshwar Kumar who swung the ball both the ways for terrific returns of 4-0-9-3. India with just three specialist bowlers failed to consolidate on the early inroads and conceded the match through the 106-run partnership between the experienced duo of Mohammad Hafeez (61 from 44 balls with 6 fours and 2 sixes) and Shoaib Malik (57* from 50 balls with 3 fours and 3 sixes).

The visitors at half way stage were just 45 for 3 in 10 overs. Hafeez and Malik after surviving the seamers took toll on the part-time bowlers to bring Pakistan back on track. Pakistan were coasting along to victory until a dramatic 18th over from Ishant Sharma which was taken for just two runs and then followed up by the penultimate over from Dinda which went for just four runs. 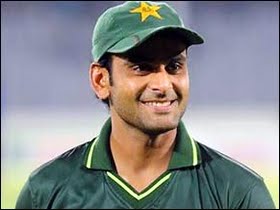 Pakistan almost threw the match away by making the equation – 10 runs from the final over. Dhoni with all his options exhausted had to go with Ravindra Jadeja who was belted for 20 runs in his previous two overs. A cool Shoaib Malik wrapped up the match with two balls to spare by smashing a six onto the sightscreen for Pakistan’s maiden T20I win over India.

Skipper Mohammad Hafeez got the Man of the Match award for his superb batting show.

India kept down to 133 for 9: Pakistan fought back immensely to restrict India from a strong position of 77 for 1 to 133 for 9 in the First T20I at Bangalore. India lost the plot after the dismissal of Ajinkya Rahane who made an impressive 42 from 31 balls with five fours and a six. Rahane provided a lovely start after seeing off the initial threat from the 7ft 1 inch Mohammad Irfan who made the Indian batsmen hop up with his speeds of 145 kmph.

Along with Gambhir, who made 43 (from 41 balls with 2 fours and a six), Rahane took India to 77 for 1 inside 11 overs. It was a slow start initially but picked up momentum gradually. Things were nicely set for the Indian middle order to come up with the fireworks. Yuvraj Singh appeared to do just that when he slogged his first ball for a monstrous six. However, his stay in the middle was cut short and so was the case with the other four capable middle order batsmen including MS Dhoni and Suresh Raina.

Pakistan kept on chipping away at the wickets and India who were on course to reach a minimum of 160 finished with a disappointing 133 for 9. Saeed Ajmal with 2 for 25 and Umar Gul with 3 for 21 did irreparable damage to the Indian batting.

Toss and Teams: Pakistan has won the toss and elected to bowl first in the 1st T20I at the M Chinnaswamy Stadium in Bengaluru. Pakistan Captain Mohammad Hafeez believes that the pitch will have something for the seamers in the first half and the dew is expected to play a heavy part in the second half of the match.

India has given T20I debut to all-rounder Bhuvneshwar Kumar. Ishant Sharma comes in for Parvinder Awana while R Ashwin is going to sit out for once. Piyush Chawla also sits out and Ravindra Jadeja comes back into the XI after missing out in the second T20I against England.