It was probably a good thing not having the game time: Kyle Jamieson

New Zealand pacer Kyle Jamieson, who starred for the team with three wickets on Day 1 of the Kanpur Test against India, said that him and Tim Southee enjoyed bowling early on since there was some movement and things seemed familiar. New Zealand have pitches back home that offer plenty of seam and swing and Jamieson was pleased to discover some assistance in Kanpur.

The tall fast bowler got the key scalps of Mayank Agarwal, Shubman Gill and Ajinkya Rahane to put India under pressure before debutant Shreyas Iyer (75*) and Ravindra Jadeja (50*) lifted the hosts with a century stand.

Speaking at the end of the first day’s play, Jamieson asserted that the visitors bowled pretty well. He stated, “I thought we were pretty good. Certainly, we had our discussions before the game and we were lucky to find some movement early on and it was a bit more familiar to us. So we fell back on that.” 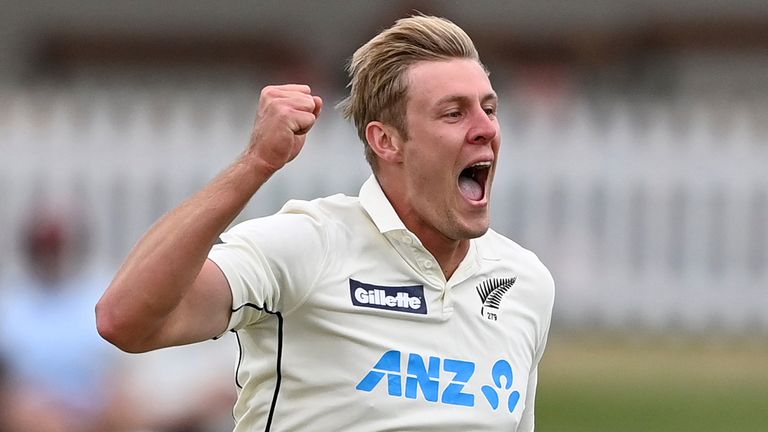 Jamieson did not feature in the T20 World Cup games and was also not seen in action during the T20I series against India. The 26-year-old described the unexpected break as a blessing in disguise. He pointed out, “It was certainly nice to get back out there. It was probably a good thing not having the game time. I have every chance to step back and actually work on (my game) so at the end of a long year, when you actually have the chance to take a step back it’s quite pleasing and it’s nice to be back on the park playing Test cricket.”

Indian opener Shubman Gill, who scored a fluent 52 before being cleaned up by Jamieson, admitted that he did not expect the ball to reverse so early. He also praised the Kiwi pacer for making life difficult for the Indian batters.

The youngster commented, "Sometimes, it's difficult to start knowing when it's reverse-swinging and especially after coming back from lunch, I didn't expect the ball to reverse that early in the game.

"That's the thing about Test cricket, you have to read the conditions fast. In this particular innings, I wasn't able to read that ball well as generally, I wasn't expecting the ball to reverse," he added.

India will resume their innings at 258 for 4 on Day 2 of the Kanpur Test. Iyer is 25 away from becoming the latest Indian to smash a hundred on Test debut.