Sri Lanka beat Zimbabwe by six wickets in the final of the tri-series, also featuring West Indies, on Sunday at the Queens Sports Club in Bulawayo. Here’s a look at the top performers in the series

Sri Lanka beat Zimbabwe by six wickets in the final of the tri-series, also featuring West Indies, on Sunday at the Queens Sports Club in Bulawayo. Here’s a look at the top performers in the series. 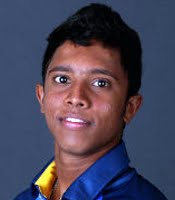 Kusal Mendis: He was the man of the final as well as of the series. He finished the series with 167 runs in five innings at an average of 55.66 with two fifties at a strike rate of 105. Mendis blasted 94 against West Indies in the league match before smashing 57 from 72 in the final. The two momentum-changing knocks won him the man of the series for sure.

Jason Holder: The West Indies captain shone with the ball. He was the highest wicket-taker with nine wickets at an average of 19.77, an economy rate of 4.68 and a strike rate of 25.3. His best of 3 for 57 came against Sri Lanka in one of the league matches. In the other matches, he claimed two wickets each. With the bat, Holder made 73 runs at a strike rate of 98.64 with a best of 45 not out.

Asela Gunaratne: The medium-pacer picked up eight wickets in four innings at an average of 14.75, an economy rate of 3.93 and a strike rate of 22.5. His best of 3 for 10 came in the final on Sunday, against Zimbabwe. Gunaratne also claimed 3 for 21 in a league match against Zimbabwe earlier in the tournament.

Niroshan Dickwella: The Sri Lankan wicket-keeper had a decent series. He scored 179 runs in the series at an average of 44.75 at a strike rate of 87.31. He scored 41 against Zimbabwe in a league match, and 94 against the West Indians in another round-robin encounter.

Suranga Lakmal: He also did a good job for the Sri Lankans. He finished the series with an average of 24, claiming seven wickets, at a strike rate of 31, and an economy rate of 4.62. Some of his figures in the series read 2/19, 2/45 and 2/67. The Sri Lankan bowlers complemented each other perfectly in the series.

Ewin Lewis: The West Indian was the top scorer in the series with 202 runs from four matches, at an average of 50.50, and a strike rate of 102.2. Lewis’ impressive numbers were built around the stupendous 148 against Sri Lanka in a tough chase, which unfortunately ended in a losing cause. It was a brilliant innings nonetheless.