IPL 2016: Praveen Kumar was exceptional for Lions against Delhi

On form alone, Gujarat Lions went into the match against Delhi Daredevils on a high, even though the game was being played at the latter's home ground. In their previous encounter, Gujarat had overcome a maiden T20 hundred from Virat Kohli to taste victory against Royal Challengers Bangalore

On form alone, Gujarat Lions went into the match against Delhi Daredevils on a high, even though the game was being played at the latter's home ground. In their previous encounter, Gujarat had overcome a maiden T20 hundred from Virat Kohli to taste victory against Royal Challengers Bangalore. The Lions must have definitely been buoyed by their win, as they came out all guns blazing with the bat. Lions had the upper hand in the match throughout, but Delhi fought back commendably with both bat and ball, to stay in the game till the end. Lions however had enough gas in the tank to hold on to the slight advantage and claim another victory in their impressive debut year.

In a closely contested T20 fight a few deliveries can make a big difference. And, in the context of Wednesday's match, Praveen Kumar's spell of 0 for 13 from his four overs stood out. It was the penultimate over bowled by him that made the big difference. Chris Morris was in red hot form, as a result of which Delhi had the slight upper hand going into the last two overs. But, the experienced Kumar bowled a brilliant second last over, conceding only four runs, to put the Lions ahead again. Then, Dwayne Bravo, who had had a poor game until them, ensured there was no Carlos Braithwaite-like effort at the end, finding the blockhole regularly.

While the bowling won them the game at the end, Lions would be pleased with the kind of form shown by their openers in the match. The scintillating start from Brendon McCullum and Dwayne Smith was exactly what they had been missing in the previous games. The 112-run stand, which came in under 12 overs, set up the Lions for a 200 plus total. However, the visitors would be disappointed that they could not get anywhere close to that target in the end. Both McCullum and Smith fell within a few balls of each other, and that definitely swung the momentum. The experienced trio of Suresh Raina, Dinesh Karthik and Ravindra Jadeja disappointed with the bat.

While Delhi fought back hard with the bat, they lost the momentum soon enough as they lost their first three batsmen for next to nothing on the board. At 3 for 16, which soon became 4 for 57, there was little hope for Delhi. But, Morris finally proved why he is the million dollar man of IPL 9. With the ball earlier, he was the only one who made some sort of impact on the Lions batsmen. And when he came out to bat, he threw all equations out of the window with a scintillating display of strokeplay. 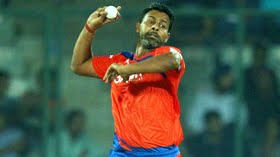 Thanks to Morris' spectacular knock, Delhi found themselves at the doorsteps of victory. But, in a match dominated by batsmen from both sides, those few quality deliveries from Kumar proved to be gold. And they said T20 is a batsman's game.