Flashback: That controversial Lord's Test of 2010

The first Test between England and Pakistan at Lord's, which began today, marked the comeback of fast bowler Mohammad Amir, who was among the three people convicted for spot-fixing during the Lord's

The first Test between England and Pakistan at Lord's, which began today, marked the comeback of fast bowler Mohammad Amir, who was among the three people convicted for spot-fixing during the Lord's Test back in 2010. As life comes a full circle for the talented pacer, we turn the clock back a few years, and look at how the 2010 Test in question panned out.

Pakistan won the toss and chose to field first in the match that was held from August 26 to 29. The Englishmen proved to be exceptional with the bat in their first inning. They notched up an impressive 446 having batted out for 139.2 overs. Jonathan Trott, who was at the peak of his powers back then, anchored the innings with a memorable 184. He occupied the crease for over 550 minutes and faced 383 balls during the course of which he hit 19 fours. He was the last man out at the score of 446.

While Trott was the top scorer in the England innings, there was a special effort in store from Stuart Broad, who batting has lost sting these days. In that game, Broad blitzed his way to 169 from 297 with the aid of 18 fours and a six. It was thanks to his effort that England were successful in getting close to 450. This was after big names like Alastair Cook, Andrew Strauss, Kevin Pietersen and Paul Collingwood all fell cheaply.

And, while the match is remembered for all the wrong reasons as far as Amir is concerned, he was actually the best bowler on show for Pakistan in the match. In the first innings, he starred with 6 for 84. Some of his victims were Cook, Pietersen, Collingwood and Matt Prior. Mohammad Asif, the other controversial character from that match, claimed 1 for 97 while Saeed Ajmal finished with a couple.

In response, a dispirited Pakistan were blown away for 74 in 33 overs. Graeme Swann finished with sensational figures of 4 for 12, getting Salman Butt and Azhar Ali along with the tail. Swann was excellently supported by Steven Finn, who picked up 3 for 38, his scalps including the two talented Akmals, Umar and Kamran. Stuart Broad and James Anderson shared the other three wickets between themselves. 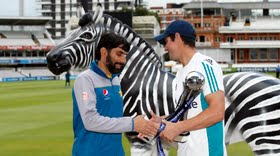 Having been battered and bruised in the first innings, the result became a mere formality. Following on, Pakistan did slightly better in their second innings, managing 147. But, the victory margin of an innings and 225 runs was a good enough indication of the gulf between the teams. Swann once again stood out with five wickets, but it was Broad who got the man of the match for his stirring all-round show. Trott was the man of the series for England, and Amir for Pakistan.

Unfortunately, what transpired later off the field overshadowed all that took place during the Test.