After 73 matches, the Gujarat Titans (GT) will take on the Rajasthan Royals (RR) in the Indian Premier League (IPL) 2022 final at the Narendra Modi Stadium in Ahmedabad on Sunday (May 29. The summit clash will begin at 8:00 PM since there will be a grand closing ceremony as well.

Gujarat booked their place in the IPL 2022 final in their maiden season by defeating Rajasthan by seven wickets in Qualifier 1. Chasing 189, they got over the line with ease courtesy David Miller’s 68 not out and captain Hardik Pandya’s unbeaten 40 off 27. It was a completely dominant performance.

GT had gotten the better of RR in the league stage match as well. On that occasion too, it was quite a thumping win. Batting first, they put up 192 for 4 and then restricted Rajasthan to 155 for 9. Gujarat will thus have the psychological advantage going into the summit clash. 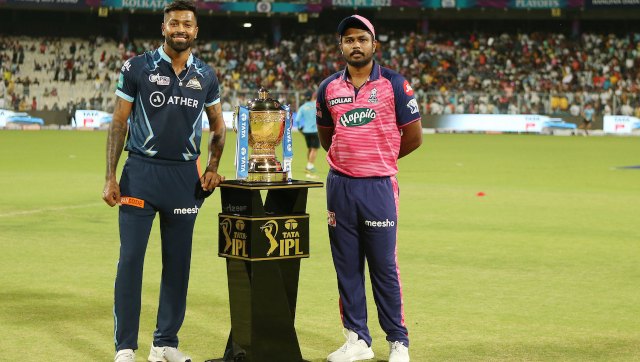 Rajasthan might not have beaten Gujarat in IPL 2022 as yet but they will have some confidence following the impressive win over the Royal Challengers Bangalore (RCB) in Qualifier 2. Their bowling effort was excellent as pacers Prasidh Krishna and Obed McCoy claimed three wickets each. Trent Boult, Ravichandran Ashwin, and, of course Yuzvendra Chahal, have all contributed during the course of the campaign.

With the bat, Jos Buttler is back to his best. RR will be hoping that he can come up with one last big effort in the final that can lift them to glory. Yashasvi Jaiswal, skipper Sanju Samson, Devdutt Padikkal and Shimron Hetmyer have contributed to Rajasthan reaching this far in their own way. This is RR’s first final since 2008. There will also be that emotional angle of winning the trophy for the first Royal, the late Shane Warne.