The two teams that will be battling it out in the first of the two Super Eights clash on Friday are among the most well-balanced outfits in the tournament. If Pakistan have exceptional batting talent and three of the best T20 bowlers in the world, South Africa have an experienced line-up of batsmen, capable of delivering against the best and pace bowlers of the highest calibre.

The two teams that will be battling it out in the first of the two Super Eights clash on Friday are among the most well-balanced outfits in the tournament. If Pakistan have exceptional batting talent and three of the best T20 bowlers in the world, South Africa have an experienced line-up of batsmen, capable of delivering against the best and pace bowlers of the highest calibre. It will be a contest of equals then when the two sides face off. Although not a knockout clash, both teams would be keen to begin on a winning note so that their path to the semis is smoothened.

Going into the series, South African skipper A B de Villiers had admitted that the side has failed to perform to potential in the past world events and that they are keen to make up for the same. They have done well so far, with the comprehensive win against the meek Zimbabweans, and managing to get the better of Sri Lanka in a mini contest (seven over per side battle). The latter victory would have given them confidence in particular since setting up and defending a target in such a reduced contest in terms of overs is an extremely difficult task.

Among the major positives for South Africa from the two wins is that their openers are in form. Both Hashim Amla and Richard Levi, in particular, spent some quality time at the crease. And while it is equally important for the latter batsmen to be among the runs, the performance of openers in T20 cricket is of paramount significance. The skipper de Villiers himself played a key hand in the win against Sri Lanka, while Jacques Kallis and J P Duminy have the experience to come to the party. In the bowling, South Africa would continue to depend heaving on Dale Steyn and Morne Morkel, but how the spinners bowl will becrucial as well. 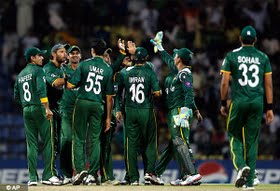 For the first half of the game against Bangladesh it seemed that Pakistan had totally lost their sense of purpose. As the ball was being bludgeoned to all parts of the ground by Shakib Al Hasan, the fielders dropped sitters, and bowlers could only wonder how to stop the unstoppable. The signs were dangerous, but only as long as Pakistan were in the field. Once out to bat, Pakistan showed why Bangladesh were no match to them. Imran Nazir played as brilliant an innings as Hasan’s, but managed to end up on the winning side since, unlike the former Bangladesh skipper, he got better support from his teammates, skipper Mohammad Hafeez in particular. The form of Nasir Jamshed is also an ominous sign for opponents.

In spite of the triumph against Bangladesh, Pakistan should still be concerned about their bowling performance. Sohail Tanvir and Umar Gul dare no repeat the mistakes they committed in the last game, else the fielders will be off to another leather hunt. The one area where Hafeez would look to target South Africa is in the spin department. Their vast improvements apart, the Proteas remain better players of fast bowling. Saeed Ajmal and Shahid Afridi would be keen to demonstrate the same.

It remains to be seen who wins the battle of flair versus consistency.