Boys understand the importance of 2018: Shastri

India will be facing their toughest challenge in recent years when they begin their tour of South Africa next month. Ravi Shastri, India coach, spoke to TOI about the challenging times ahead.

On the upcoming South Africa tour, he was quoted as saying in a Cricbuzz report, “This team is looking good and they have their priorities in place. They're hungry to prove themselves at home and away. For two years, barring the tour of Sri Lanka in July and August, we played at home, especially the whole of 2016, and while that was a job well done, these boys understand the importance of the year 2018. 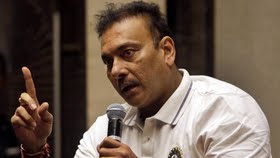 “Frankly, we're not too hooked on to this "home and away" thing where a lot of chatter goes on about conditions that aren't too familiar.”

Speaking about Jasprit Bumrah’s selection, he told TOI, “Well, he has just worked his way to the top so well. He's young, hard working, and has a unique action with which he can whip up quite some pace. Bumrah adds a lot of value to this attack. We have to earn those 20 wickets if we have to make any impact in a Test match and we need all the arsenal possible because it's going to be quite a testing tour.”