England’s woeful first innings batting performance brings to the surface, once again, their seemingly insurmountable ineptitude against good spin bowling.For a top ranked side to so meekly succumb for a measly 191 on a surface that the opposition just erected a massive 591/8 declared, must indicate less than stellar batting. And as if to emphasize how clumsy the first innings effort was, Alastair Cook and Nick Compton added 111 without being parted after they were made to follow-on.

It couldn’t be that the track had improved; more likely was that a more resolute and sensible approach by the openers bore fruit. Both had some luck, but they were more positive this time round. England will need to continue in that vein on the fourth day if they are going to save the test, for victory is surely beyond them now. 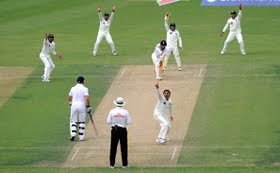 There are quite a number of reputedly good players of spin bowling in this England side, and they have sometimes shown ability against the turning ball. But they have looked so clueless so often that their mindset against spin must now be questioned. What could have possessed Ian bell, for example, as composed a player as there is in the game, to rush down the track to the first ball he faced, trying to launch Pragyan Ojha out of the ground? Aggression is all well and good, but this seemed more an act of desperation.

England was beaten every game in a three test series in Abu Dhabi against Pakistan early this year when they could not adequately respond to SaaedAjmal and Abdur Rehman. Both spinners combined to capture a stunning 43 of the 60 wickets that fell. In March, the two-test series against Sri Lanka ended 1-1, but Rangana Herath racked up an impressive 19 wickets in both tests.

But the United Arab Emirates (UAE) wickets, where the tests against Pakistan were held, were much more spinner-friendly than those in India, and besides, England were made to struggle against “mystery spinners,” and since India had no slow-men of that variety then there was no need to be overly concerned. At least that’s what Graeme Swann thought. Speaking before the tour and recalling their performance against Pakistan and Ajmal especially, England’s foremost spin bowler offered this opinion:

When we played in Dubai that was not really the subcontinent, that wicket was very unique in the sense that it was very skiddy and span as well. India’s wickets are more traditional, more what people are used to, so I would be surprised if that happened again.

It would be interesting to hear what he had to say after this meek first innings surrender.

In a way, Swann had a point. Ojha and Ravichandran Ashwin are good bowlers, but it required the cooperation of the England batsmen for the side to be so easily overcome in the first innings. They now need to cast the first innings failure aside, and regard it as a one-off that cannot be repeated. This can’t turn out to be the same old story recurring again and again.

The toss in this game was probably more significant than most, and the visitors were unfortunate to have lost it. Cook said they would have batted had they won it and they would undoubtedly have been in a better position if that happened. As the game now stands, his team will have to improve dramatically on their first innings effort if they are not to fall behind in the series. Having dug themselves in such a deep hole, it will be awfully difficult to climb their way out.