Craig Ervine hit an unbeaten century as Zimbabwe defeated a fighting Ireland by five wickets in the second ODI at Harare to win series 2-0. Chasing a challenging 269 for victory, Zimbabwe found themselves in a spot of bother

Craig Ervine hit an unbeaten century as Zimbabwe defeated a fighting Ireland by five wickets in the second ODI at Harare to win series 2-0. Chasing a challenging 269 for victory, Zimbabwe found themselves in a spot of bother after they lost a couple of wickets in quick succession. However, Ervine featured in a 98-run third wicket partnership with Sean Williams, which steadied the hosts. Tino Mutombodzi and Sikandar Raza also played crucial knocks as Zimbabwe did not allow the visitors another opening. Ervine finished off the match with a boundary, which also brought up a much-deserved hundred for him. 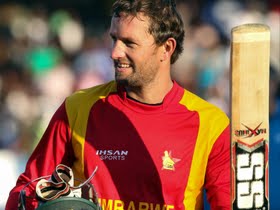 Ervine batted for a majority of Zimbabwe innings to anchor the ship for the hosts after they lost both openers before the chase could reach the 10th over. Chamu Chibhabha and Richmond Mutumbami decided to go on the attack right from the start, but both fell within a few deliveries of each other as Zimbabwe found themselves in somewhat trouble at 51 for 2. Ervine and Williams however continued to be aggressive, and kept the pressure up on the Irish bowlers. Ervine smashed a number of boundaries early in his innings to race away. At the other end, Williams took a liking to the spinners, and employed the sweep to good effect against them. He eventually perished, hitting Andrew McBrine to Ed Joyce at long on.

At 149 for 3, Ireland could have had faint hopes of a comeback. But, Mutombodzi made sure nothing of that sort happened. He kept the scoreboard ticking, and did not allow the pressure to build. With Mutombodzi batting well, Ervine could also settle in nicely, without having to worry about the run-rate. The duo were easing their way towards the target when George Dockrell plucked a brilliant catch to send back Mutombodzi. Ervine also presented a chance when he edged John Mooney behind the stumps. But, Niall O'Brien standing up to the stumps could not hold on, and that was the game changer of sorts.

Before Ervine's brilliance, Ireland showed good resolve with the bat to put up a fighting total. Put into bat, the visitors lost skipper William Porterfield cheaply, but Paul Stirling made up for the loss with a sizzling knock. He raced to 72 with some well-timed boundaries when he was trapped lbw by Raza. Niall O'Brien then came up with a patient fifty, a knock which also featured three big sixes, and Gary Wilson got the runs at the death with some well-timed boundaries. Thanks to the good finish, Ireland put up an impressive total on the board. They began well with the ball too, but once Ervine got in, it was a one-way street.