Here’s what Azhar said on comparisons between Kapil and Pandya

Former India captain Mohammed Azharuddin has said there cannot be another Kapil Dev, even as some are comparing Hardik Pandya as a future Kapil.

Former India captain Mohammed Azharuddin has said there cannot be another Kapil Dev, even as some are comparing Hardik Pandya as a future Kapil.

There were some comparisons after Pandya’s success in the first Test. However Azhar told PTI, "It is not advisable to do that. It is not good because there can never be another Kapil Dev. It is very difficult to get another Kapil Dev as the amount of hard work and workload he took over a period of time , not many people can do it now.” 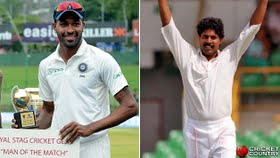 On India's 1-2 loss in South Africa, Azharuddin opined, “The bowlers won the last Test match. They really put South African batsmen under pressure. We were bit unlucky that we could not get the series our way.

"It is good that we won the last Test. We redeemed our prestige. The team played very well in tough conditions. It was not an easy wicket to play on," he added.

"They batted well, bowled well everything clicked together. I am very happy with the teams victory. In the ODIs, hopefully, our batting will click and we will win the series," Azharuddin further told PTI.