Delhi won by 15 runs. Finally Delhi move off the bottom of the table now. 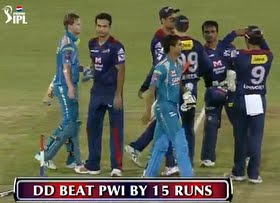 David Warner, the Man of the Match. "I am enjoying it. I just thought if I could get myself in and bat 20 overs, we could put a decent score on the board. We were always trying to get 10 an over for last five, sixty was bonus. You want the ball to follow you in the field, you want to be in the hot spots. You see Kohli, AB, they want to do that too. Hopefully we can take the momentum into the next game."

Kane Richardson is making his IPL debut, ahead of Mitch Marsh. Ishwar Pandey is out for Pune.

Both teams will be looking to haul their sputtering campaigns back on track after poor shows in their last respective games.

Daredevils have won two of the four games they played against Warriors, with one being a no result.

Virender Sehwag is the seventh highest run-getter in the IPL, with 2051 runs from 71 matches at an average of 31.07.