The seventh and final edition of the ICC Champions Trophy is just a few days away. Starting today, we preview the chances of all the eight teams in the tournament that has never quite got its due in spite of being labeled as the mini-World Cup. We begin with former champions West Indies.

The seventh and final edition of the ICC Champions Trophy is just a few days away. Starting today, we preview the chances of all the eight teams in the tournament that has never quite got its due in spite of being labeled as the mini-World Cup. We begin with former champions West Indies. 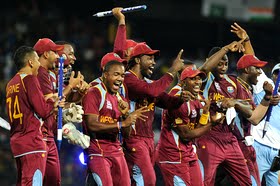 Dwayne Bravo: The new skipper would undoubtedly be one of the most watched after players in the series. Bravo has the ability to turn matches with the bat as well as the ball. With the willow in hand, he can clear the boundaries at will and, while bowling, he possesses the variations to trouble the best in the business. For sure, an asset to the West Indies side. His superb showing in the recently-concluded IPL will give him the confidence to perform well, but it remains to be seen what he makes of the challenge of captaincy offered to him.

Kieron Pollard: That Pollard is a T20 genius is now a foregone conclusion. His performance in the IPL was the latest proof of the same. But, in recent years, he has also shown the ability to come up with the goods in the 50-over format. If opponents don’t get him out early, he can wreak havoc of unimaginable sorts.

Chris Gayle: In T20s, the name itself sends shivers down the opposition’s throat. The left-hander has proved to be an explosive match winner over the years in one-day cricket as well. West Indies would be hoping for nothing different from him as they look to add another ICC trophy to their collection, following their triumph in last year’s World T20.

Sunil Narine: It has been a while since the so-called mystery spinner made his mark in international cricket. Now is about the time batsmen the world over should be feeling a lot more comfortable facing up to him. But, that hasn’t been quite the case. In a way, the Champions Trophy will test both Narine and the batsmen who take him on.

Weak links: Veteran Ramnaresh Sarwan has been included in the squad, but it has been some time since he came up with an impressive performance. Fielding is another area where most teams hold an edge over Windies.

Past record: Although they have had a terrible time in the international cricket over the last decade and a half, West Indies have been a dominant side in the ICC Champions Trophy. They, in fact, went on to win the trophy in 2004 in England, which raised hopes of a Caribbean revival in cricket. Sadly, the victory did not prove to be a turning point in West Indies’ fortunes. Even in the inaugural edition of the event, held in Dhaka in 1998, West Indies made their way into the final, where they bumped into South Africa and came second best.