Chasing a target of 117, Thailand registered a victory by four wickets against Pakistan with one ball remaining in the 10th match of the Women's Twenty20 Asia Cup on Wednesday. Natthakan Chantham's 61 in 51 balls including 2 sixes built the foundation of the win.

It was the first victory for the Thailand women's team at the Sylhet International Cricket Stadium in Bangladesh. The team earlier lost two matches in the multi-nation Asian event. Bangladesh defeated Thailand by 9 wickets in the inaugural match on October 1. The next defeat was by Sri Lanka on October 4.

Pakistan batted first and scored 116 with the loss of five wickets. Thailand met the target with one ball remaining in the short format and Natthakan Chantham was announced Player of the Match.

Thailand captain Naruemol Chaiwai said, "We are very happy with the win. Pakistan is a strong side. They are a top-class team. We played cricket with happiness. We wanted to have fun in the ground. As you saw, it came automatically." 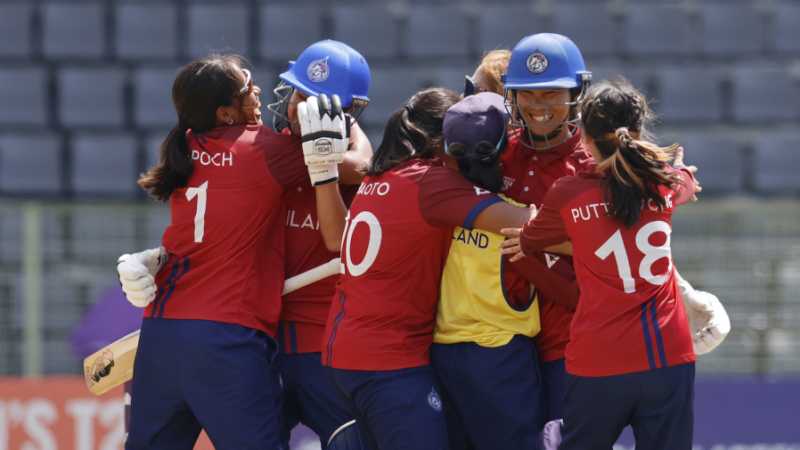 Thailand head coach Harshal Pathak thanked the batters and credited them for their excellent performances and particularly Natthakan Chantham for her 61 runs in 51 balls.

Pakistan opener Sidra Ameen looked upset following the defeat. She pocketed an impressive 56 runs in 64 balls. She said at the press conference, "Ups and downs are a part of life as a player. Definitely we as a unit are hurt. But, we are looking towards the upcoming matches. We have two or three matches left so we can bounce back."

Thailand coach Pathak said the players will play aggressively regardless who the opponents are to pull better and bigger results in the future. She said, "Sometimes it comes off, sometimes it doesn't. The more we try to play this type of cricket, we will be able to get mastery in it over time."

Pakistan has won two of three matches played so far in the Asia Cup 2022. The first was against Malaysia on October 2 while the second victory was against host team Bangladesh on October 3.

Despite the loss in the match, Pakistan is ranked second after India in the points table of the event and Thailand is placed fifth.