Former India captain and batting legend Rahul Dravid rates ex-Aussie paceman Glenn McGrath as the best fast bowler he has ever faced. Dravid has played some of his best Test knocks against Australia, including the 180 at Kolkata in 2001 at Eden Gardens, and the 233 at Adelaide in the historic 2003-04 match. Dravid looked back at his battles against McGrath with great admiration.

"Australia were the best cricket team in my generation. Amongst them all, the greatest bowler that I played against, not only the greatest Australian bowler, but the greatest fast bowler I played against has to be Glenn McGrath," Dravid commented at an event in Mumbai. "He McGrath was absolutely brilliant, no one challenged my knowledge of the off-stump as much as McGrath did. He was relentless and gave you nothing. A lot of times, whether he is bowling in first hour of the morning or late in the afternoon of in the evening, he McGrath was going to give you nothing, he was relentless and the accuracy," added Dravid. 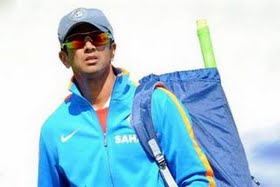 The Indian legend who amassed over 13,000 Test runs in over 164 matches continued in his praise of McGrath, who finished with 563 wickets in 124 Tests. "He was not mean as he looked, but he could be very very mean with the cricket ball because he gave you nothing. He was one of those guys you, while batting, think how to score a run and where is the extra-run going to come from. He just had that level of accuracy and control. He had good pace, bounce but a good game sense as well. McGrath was probably the greatest fast bowler I played against,” Dravid went on to admit.

On the Indian team’s ability, Dravid was quoted as saying by cricbuzz that he is hopeful India can do well when they travel abroad, something they did reasonably under Sourav Ganguly, but failed miserably under MS Dhoni. "It's a nice thing that they have a lot of these home Tests over the next few months and I hope that by the time India travels abroad for tours, we will have a settled batting line up, a sort of confident successful middle order in place. If you have a set middle order and the guys know and are secured in their position, I think it will give us the best chance to succeed abroad too,” Dravid told cricbuzz.

Dravid recalled how great players during his time combined to help India win overseas. "It was a great thing that in my generation, we had sort of five batsmen, Sehwag, myself, Sachin, Sourav and Laxman, and even Gambhir for a while, who were settled in the line-up for a long time. I hope that by the time we tour abroad, we've a settled middle-order. The potential is there to succeed in all the conditions," he was quoted as saying by the website.

The former India number three was also all praise for Cheteshwar Pujara, who has taken over the slot since his retirement. "Pujara has been exceptional at No. 3 after I've left. He's batted beautifully. He's played well in this series against England, he is a terrific Test player. I hope that we are going to see his best years ahead. Ajinkya Rahane and Ravichandran Ashwin have been exceptional as well, and Virat is absolutely sensational. I think we've some very good talent. I'm very impressed with the batting talent we have and they are growing, developing as a team, they still they are figuring their way out,” Dravid further said.