New Zealand deservedly maintained their two-year old record of remaining unbeaten in Test series', putting up yet another superlative effort, this time with the ball, on the last day at Leeds, to square the series 1-1.

New Zealand deservedly maintained their two-year old record of remaining unbeaten in Test series', putting up yet another superlative effort, this time with the ball, on the last day at Leeds, to square the series 1-1. Spin did most of the damage on the final day, with Mark Craig claiming three wickets, including the final one of the match. However, it was Kane Williamson, whose surprise factor overawed the England. The youngster, known more for his batting, claimed three big wickets in quick time. And, despite worthy fifties from Alastair Cook and Jos Buttler, England lost by 199 runs. 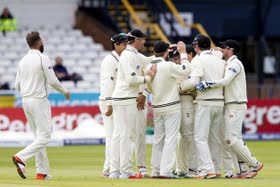 The final day began on a perfect note for the Kiwis. Rain stayed away, and their bowlers could concentrate on the task at hand. New Zealand kept things extremely tight as five of the first six overs bowled were maidens. Trent Boult struck also early, getting the ball to move, and having Adam Lyth caught behind. Gary Ballance's horror run continued as Boult got through his shaky defence before he had settled in. Craig then took over, claiming two wickets in the space of three deliveries -- the scalps were the big ones of Ian Bell and Joe Root. Bell hit one straight into the hands of leg slip while Root's leg glance was held by Tom Latham after the ball pounced into his jumper.

If England had any faint hopes of miraculously chasing down the target, it quickly evaporated in the first hour. It was now about survival, and with skipper Cook at the crease, those slim chances remained alive. Ben Stokes joined Cook and carried on playing positively. But, Brendon McCullum's masterstroke of introducing spin did the trick as the off-spinner had him caught behind for 29. At the other end, Cook carried on patiently, putting his head down, and battling against time. He reached a well deserved half-century, but couldn't carry on much beyond that as the golden arm of Williamson got him, and even a review could not overturn his lbw. Cook had batted doggedly, occupying the crease for 171 balls, but even with his mini-heroics, England were left with too much to do. The last session was all about Buttler's resistance versus Kiwis' exuberance, the latter triumphing as England never got a big enough partnership going to keep the Kiwis at bay. While spin was the dominating factor on the final day at Leeds, Matt Henry chipped in by cleaning up Moeen Ali cheaply. Stuart Broad and Mark Wood hung around for a while, but you cannot depend on them to save Tests.

If England managed to lose with less than 20 overs to play, it was primarily because Buttler put his head down, curbed his natural instincts, and kept the New Zealand's bowlers at bay for as long as he could. On 73 though, he completely misread one from Craig, and shouldered arms to one that was coming back in. The dismissal brought joy for the Kiwis, as they were deserved victors dominating the Test from the start. The aggressive push for win meant that even poor weather could not stop their juggernaut.