New Zealand captain Kane Williamson is not too pleased with the current World Test Championship points system, as per which a winning side can earn a maximum of 120 points irrespective

New Zealand captain Kane Williamson is not too pleased with the current World Test Championship points system, as per which a winning side can earn a maximum of 120 points irrespective of whether it is a two-Test series for a five-Test series. The India-New Zealand series will have a maximum of 60 points to be earned per game while a five-match series will give 24 points per game.

Speaking ahead of the first Test against India at Wellington, which begins on Friday, Williamson commented, “It’s an interesting one. I guess there’s an element to it that isn’t fair. But I guess there is an effort in bringing context to Test cricket which wasn’t there. So I mean the World Test Championship is a step in the right direction. It’s not perfect but I guess after the first year or two of it, there’ll always be efforts to continue to make it a better product.” 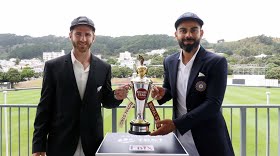 Williamson did hint though that it would be better if the point systems are relooked at, and was hopeful that things will develop over time. “It is a step in the right direction but there are so many parts to it that some teams playing five, some teams playing two, the difference in countries, there are just heaps of different parts to it that don’t quite make the points of equal measure,” said the New Zealand captain.

“But we have all signed up for it and we are all keen to see how it unfolds and I’m sure it’ll develop over time,” he further added.

It may be recalled that Ross Taylor, who will become the first player to feature in 100 matches across all formats, had also expressed some apprehensions over the points system. “There are probably still a few teething issues to go with the points system but it has brought context to cricket which is probably what ICC was after. Is it the ideal situation at the moment? Probably not. But it’s a lot better now than it was before when we had nothing,” Taylor was quoted as saying earlier this week.

Meanwhile, the show of mutual admiration between Williamson and his Indian counterpart continued ahead of the Test series. Williamson and Kohli were seen sitting on the fence together, engaged in a discussion during one of the T20 matches both were not playing. The image of the same had gone viral.

"If we had to share No 1 spot, it would be New Zealand," skipper Kohli had candidly admitted during a dinner hosted by the Indian High Commissioner on Wednesday. “Every team wants to beat us but I can tell you there would be no spite and that's why I could sit with Kane Williamson mid-game and have a conversation on life and not cricket.”

On his chat with Kohli, Williamson stated, that it was a nice exchange of views. "It was really interesting the other day to sit down and have a quiet chat on the outfield and share a lot of thoughts that we had and a lot of similar views on the game," the New Zealand skipper further said.

Williamson was also all praises for Kohli and said the manner in which he is leading India is impressive. “We have slightly different approaches which were really refreshing but that is very inspiring from a guy that’s leading the way in his tenacious and competitive attitude but his outlook on the game and what he does in and around it,” explained Williamson, who ‘rivalry’ with Kohli dates back to the 2008 U-19 World Cup.