India vs England: A Test hundred is always special, and when it's at Lord's it becomes even better, says KL Rahul

Team India opener KL Rahul, who became the latest to score a hundred at the hallowed Lord’s surface, stated that while he was pleased with the effort, for him every Test century is special. Rahul scored 129 off 150 balls, holding the Indian innings together under tough conditions.

He could only add two runs to his overnight score of 127 as India folded up for 364 on Day 2 after resuming on 276 for 3. Earlier on Day 1, Rahul featured in a 126 run-stand for the opening wicket with Rohit Sharma (83). The latter later described Rahul’s knock as the best he has seen him play.

At a press conference at the end of the second day’s play, Rahul was asked to describe the feeling of getting a hundred at Lord’s. He replied, "You know, every time you walk out on the pitch to play for your country you want to do well and score and given a good start when opening the batting. It was special once I stepped off the ground and once you see your name on the honors board you feel a sense of achievement, a sense of pride, which I had no different. 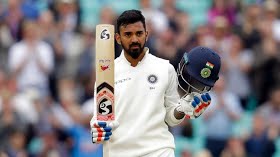 “Yeah, every Test hundred is very, very special, especially after coming back. In the couple of years that I have played Test cricket, and even before I got dropped, I got a few hundred, so a Test hundred is always special, and when it's at Lord's it becomes even better," Rahul added.

The 29-year-old batter has made a comeback to the Test arena after a gap of nearly two years. Asked to point out the challenges of switching from white-ball to red-ball cricket, Rahul admitted, “I think challenges are there in every format. Players know what are the challenges and what they need to do to be prepared. But sometimes you perform and sometimes you don’t because when you go out in the middle, the pressures are slightly different, and it depends on the situation of the game

“Yes, one-day cricket is different because after two or three overs, the ball stops swinging. Even if it is a green top, it will swing for 5-10 overs. So you can get your eye in and then you have got to make up the runs. So after initially controlling yourself, you need to play aggressive shots after that. It is completely different in Test cricket. It is all about being disciplined, waiting for the loose balls and trying to be as patient as you can and be careful with shot selection,” Rahul concluded