Indian captain Virat Kohli on Tuesday hit out at Australian captain Steve Smith, stopping short of accusing him of cheating

Indian captain Virat Kohli on Tuesday hit out at Australian captain Steve Smith, stopping short of accusing him of cheating as far as usage of DRS was concerned.

"We have been inconsistent with the DRS but we take our decisions on the field, we don't ask for confirmation from the dressing room," Kohli remarked after India's 75-run win in the Bengaluru Test.

"I have seen it twice while batting. I have seen their players looking upstairs I told the umpires, this had to stop. I don't want to mention the word but it falls in that bracket. I would never do something like that on the cricket field," he alleged.

When asked if the word was cheating, Kohli replied, "I have not said that either." 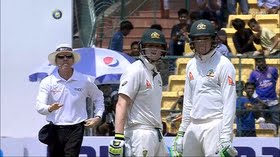 It may be recalled that after Smith was lbw to Umesh Yadav, he first spoke to the non-striker, and then looked towards the dressing room, seemingly asking for suggestions. The umpires were prompt in stopping him while Kohli was enraged.

As per rules of DRS, "signals from dressing room must not be given". In the post-match press conference, Smith however claimed that his actions were a consequence of ‘brain fade’, and admitted he shouldn't have done it

But, Kohli hit back saying this was not the first time such an incident happened. "I can only say, if it happens more than twice, it's not brain fade," he alleged.

The umpires spoke to Kohli separately after he got involved in a verbal spat with Aussie skipper.

-By A Cricket Correspondent