India vs South Africa: Kohli reveals why Saha was picked over Pant; backs Rohit as a Test opener

Indian captain Virat Kohli ended the suspense of Rishabh Pant vs Wriddhiman Saha but confirming on Tuesday that the latter would keep wickets in the first Test against South Africa, starting tomorrow October 2. He also expressed confidence that Rohit Sharma has it in him to succeed as a Test opener and that he will be given a long enough rope.

Speaking to the media ahead of the first Test, Kohli said Saha is fit and fine to go. “He is going to start the series for us. His keeping credentials are for everyone to see. He has done well with the bat whenever he has got a chance. It was unfortunate that he was out with an injury. According to my, he is the best keeper in the world. With these conditions he starts for us," Kohli confirmed.

It would be interesting to note that Saha was part of the squad during the tour of West Indies yet it was Pant who played in both the Tests. Saha last played a Test for India in South Africa in January 2018. After being ruled out with injury, Pant took over. The 21-year-old made hundreds in England and Australia but has been disappointing since. 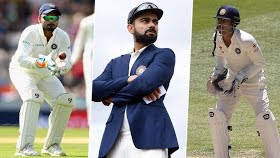 On Rohit Sharma, who made a duck in the practice game for Board President’s XI vs South Africa, Kohli stated that he has the backing of the team, and will be given time to prove himself as an opener. “If he comes into his own then the whole batting order looks a completely different batting order anywhere in the world.”

Asked what kind of a run Rohit is likely to get as an opener, the Indian captain added, “We are not looking to rush him. There is a different pattern you follow in India and different abroad. The opening is a spot where you have to give a player space to understand his own game.”

Kohli pointed towards Virender Sehwag’s stint as opener, but added, “We are not looking at a certain kind of display of batting from Rohit. It is about him finding his game at the top. Yes, his strength is to take the game forward. Like what Viru Bhai used to do for the team for a long period.

“So, it is not as if someone would have told Viru Bhai to attack and get a hundred before lunch. His natural instinct took over and he could demolish attacks once he felt comfortable,” Kohli went on to add.

Rohit began his Test career with back-to-back Test hundreds in November 2013 but has since failed to find a permanent place in the squad for the longer formats.