Every match we think of how and where we can win from: Virat Kohli

Ahead of the first Test against England in Chennai, Indian captain Virat Kohli has stated that India will not make the mistake of focusing on the World Test Championship (WTC) final since it cost them the series in New Zealand in February 2020. According to Kohli, India’s sole aim will be to win the Test matches against England.

"In New Zealand, we did discuss it (WTC final) a bit and that could have added extra pressure on us to do every thing so precisely. We ended up being under pressure a little bit. But from Australia onwards, it was all about following a good process, preparing well, going out there and just understanding the situation and making sure we play according to the situation," Kohli said while speaking to the media in Chennai on Thursday.

Kohli added that in the Australia series, they didn't speak about winning the WTC. The Indian captain explained, “I think it is a by-product of your team doing well anyway. There's no point adding extra pressure. For us it remains a game of cricket, one session at a time. One hour at a time. That is how success is achieved in the longest format of the game. 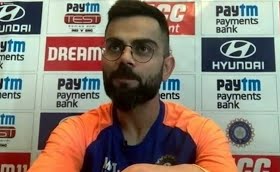 "So no point thinking about something that is still months. It is important to stay in the present and take one day at a time and move forward," he further added.

The Indian captain, who was back home when the team created history Down Under, revealed that he was highly impressed with the performance of young guns like Mohammed Siraj, Washington Sundar, Shardul Thakur and Navdeep Saini. According to Kohli, the team’s decision to go for a win was in sync with their positive mindset.

"We had decided back in 2014 when I took over as captain that whenever I get a chance I will go for the win and draw will be our last option when we don't have a chance to win. We have persisted with this. In every match we think of how and where we can win from. Making plan is one thing but persisting with it requires everyone's contribution," added the Indian captain.

"What happened in Australia recently -- youngsters coming and performing is a special win for us,” Kohli admitted.

India will face England in four Tests at home, starting Friday. A 2-0 or 2-1 victory margin will give them a place in the WTC final against New Zealand.