When India and Australia took the field on Sunday, the game was evenly balanced. Australia had been cleaned up for a below par total in the first innings and India had lost eight wickets in reply, with a negligible lead of four. Australia squared things up completely early on day three, which turned out to be the last day of the Test, claiming the last two wickets for the addition of only six runs.

When India and Australia took the field on Sunday, the game was evenly balanced. Australia had been cleaned up for a below par total in the first innings and India had lost eight wickets in reply, with a negligible lead of four. Australia squared things up completely early on day three, which turned out to be the last day of the Test, claiming the last two wickets for the addition of only six runs. The game was pretty much like a one-dayer now, with India having to get 11 runs more than what Australia got in their second innings. In that sense, the team which batted better a second time round had the best chance of winning the Test.

One spell by the man who has tormented the Aussie batsmen throughout the series however changed the course of the game, and lifted India towards the much-talked about 4-0 brownwash. Any target of close to 200 would have proved extremely tricky for the Indians considering the ball was dancing to varied tunes on the pitch that literally exploded on Sunday. Ravindra Jadeja was brought into the series as a batsman who could bowl a bit, but has ended up being quite the opposite. On the last day of the Test series, he once again asserted why he was the most effective spinner in the Indian side even as R. Ashwin was the most successful in terms of wickets. 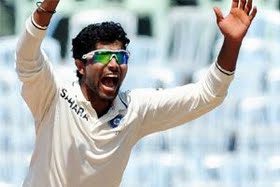 Jadeja grabbed five wickets in the innings, which was highly impressive in itself, but more significantly, he sent back the Aussie openers cheaply, which meant the visitors were on the back foot right away. The Aussies tried to unsettle the Indians by sending in a pinch hitter in the form of Glenn Maxwell to open the innings. A few big blows from him could have set Australia on the positive path to recovery, but Jadeja ensured nothing of that happened with a near-perfect delivery that crashed through Maxwell’s unsuspecting defence. A couple of overs later, he trapped David Warner in front of the wickets to derail Australia’s start. The others chipped in, but Jadeja’s spell was the key. He returned later to add more wickets to his kitty.

Jadeja’s contribution in the Test went beyond his excellent performance with the ball in the second innings. After India lost the toss and bowled first for the fourth time in the innings, the left-arm spinner picked up two important wickets whilst also ensuring that he did not give away too many runs. Jadeja only conceded 40 runs in his 29 overs during which he got rid of Shane Watson with a brilliant delivery, enticing him down the pitch, beating him in the air, and getting him stumped. The wicket of Maxwell was continued proof of Australia’s struggles against Jadeja.

Even as one heaps unending praise on Jadeja, it must not be forgotten that he India’s third highest scorer when they batted in the first innings. After a confident start, India had crumbled to 180 for 5. This is where Jadeja played a handy innings of 43 from 49 balls. Although not a significant score in terms of Test cricket, the knock was extremely valuable since it helped India get closer to Australia’s first innings total. In short, it was Jadeja’s Test, so he had to be the man of the match.