West Indies are in control of their Opening Test at the Shere Bangla National Stadium with Bangladesh losing three top order wickets in reply to the visitors’ huge total of 527 for 4 declared.

West Indies are in control of their Opening Test at the Shere Bangla National Stadium with Bangladesh losing three top order wickets in reply to the visitors’ huge total of 527 for 4 declared. The Tigers raced away to 164 on the board in just 36 overs, but none of the set batsman has survived to take the battle for tomorrow. The follow on target of 327 itself is still pretty far away for the hosts who will now bank heavily on Shakib Al Hasan to pull off something big on Day 3. 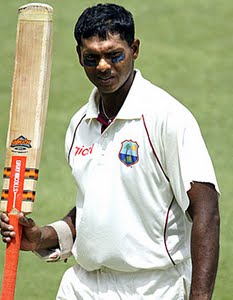 The second day’s play resumed with Windies at 361 for 4. The overnight pair of centurion Shivnarine Chanderpaul and Wicket Keeper Denesh Ramdin batted the entire first session to stretch the total to 437 for 4 in 118 overs with the latter inching towards a century.

By Tea also, the overnight pair of Chanderpaul and Ramdin was unseparated. However, Skipper Darren Sammy seized the moment and declared the innings with the 38-year-old Chanderpaul completing a second double century. The veteran remained unbeaten on 203 (from 372 balls with 22 fours) while Ramdin boosted his batting average with an unbeaten 126 (from 236 balls with 11 fours and a six). The pair put up 296 runs for the unbroken 5th wicket.

West Indies had almost instant success with the first Bangladeshi wicket in the form of Junaid Siddique (7) who got out fending off a rising delivery from Ravi Rampaul in the 5th over. The tourists then were flayed apart by the second wicket pair of Tamim Iqbal and Shahriar Nafees who launched a counter attack of sorts.

The 2nd wicket stand came to an end in just the 13th over with Shahriar Nafees only scoring a cameo of 31 (from 27 balls with 7 fours) before he was caught behind off Rampaul in an ambitious cut shot leaving the Tigers at 88 for 2. Though Tamim Iqbal cracked his way past a fifty, he couldn’t see off the day for the hosts and was dismissed in the 23rd over itself by cross-batting an ugly pull off Sammy to mid on. Tamim left the ground with an entertaining 72 (from just 71 balls with 10 fours and 2 sixes) but with Bangladesh in serious trouble at 119 for 3.

Fortunately for the Tigers, the pair of Naeem Islam (27* from 60 balls with 5 fours) and former Skipper Shakib Al Hasan (16* from 46 balls) kept their head down to survive for the day.