J Suchith did the star turn for Karnataka as the hosts came back to claim victory in the three day match against Bangladesh A at Mysore. Resuming the final day in a strong position at 188 for 3

J Suchith did the star turn for Karnataka as the hosts came back to claim victory in the three day match against Bangladesh A at Mysore. Resuming the final day in a strong position at 188 for 3, Bangladesh A folded up for 309. Suchith claimed six Bangladesh A wickets to derail the visitors' batting. Then, needing a little over 180 to win, Karnataka lost wickets constantly, and looked in danger of losing at one stage. However, the middle order came up with good enough performances to take the hosts to victory. Incidentally, Suchith also hit the winning runs.

While the batting was reasonable, it was Suchith's performance which turned the match in Karnataka's favour. When play resumed on the final day, both sides began on equal terms. But, Bangladesh A kept losing wickets, including that of the overnight batsman, who were well-set when play ended on day two. A big blow was dealt as Litton Das fell to Prasidh for 38 very early in the day. Soumya Sarkar was looking good on 43, but was caught behind off HS Sharath's bowling. The rest was mostly the Suchith show. 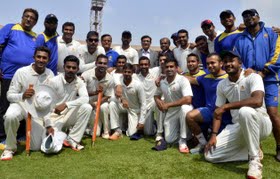 Nasir Hossain and Shuvagata Hom were featuring in a good partnership, and were threatening to take the game away. But, Suchith stepped in, and changed the complexion of the game. He was on 44, and was looking set for a fifty, when he was clean bowled by Suchith. He soon trapped Saqlain Sajib lbw for 1. The tail was easily wrapped up by Suchith as Kamrul Islam, Jubair Hossain, and Al-Amin Hossain all fell in single figure scores. Yet again, Shuvagata Hom absorbed the pressure and came up with a hard fought unbeaten half-century.

Thanks to Hom's effort, Bangladesh had what can be described as a fighting total to defend. They did reasonably well, but in the end did not have enough to defend. They began brilliantly as Ravikumar Samarth and Robin Uthappa were dismissed cheaply by Al-Amin and Kamrul Islam. At that stage, they were in trouble at 13 for 2. But a 60-run partnership between opener Mayank Agarwal and CM Gautam rescued them. Gautam was unlucky as he was dismissed one short of a fifty, but he had certainly put his side in a decent position by the time he departed.

Agarwal was dismissed by Sajib for 23, but Abhishek Reddy and first-innings hero Shishir Bhavane kept the fight alive for the hosts. They played crucial knocks of 36 and 24 respectively before departing. At six down, Karnataka were in a spot of bother, but Shreyas Gopal eased the team to victory with an unbeaten 40 from 44.