There are players, and players, and there is Brendon McCullum. What do you do when you go into bat with your team struggling at 32 for 3, and that too in your last Test match? Consolidate? Not if you are McCullum

There are players, and players, and there is Brendon McCullum. What do you do when you go into bat with your team struggling at 32 for 3, and that too in your last Test match? Consolidate? Not if you are McCullum. The outgoing New Zealand skipper played the most amazing of knocks in what was his penultimate knock in international cricket, and if the Kiwi bowlers have their say, it will well end up being McCullum’s final innings in international cricket. If that happens, it would be the perfect way for the New Zealand skipper to walk away. For, it was the kind of knock that typifies McCullum’s approach to the game.

A few players before McCullum have got a hundred in their last Test, but what the Kiwi captain achieved was indeed special, for which player before him has registered the fastest hundred in his farewell Test? The manner in which McCullum approached the innings reiterated that he is quitting the game just like he entered it, as someone who just loves hitting the ball. Many batsmen over the years, including the likes of Sachin Tendulkar and MS Dhoni have mellowed down, but the same hasn’t been the case with McCullum. On the contrary, his aggression quotient has increased with age. 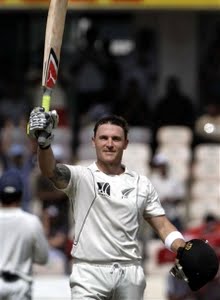 Unless McCullum does something even more spectacular in the second innings (in case he gets a chance to bat), which seems rather inhuman, this whirlwind knock on Saturday will remain the defining memory of McCullum’s career. In this one innings, he encapsulated all that he is known for when it comes to his batting – charging down the wicket to fast bowlers, and thrashing them to various parts of the ground. Even after he was reprieved on 39, caught off a no ball, he did not wind down. McCullum only went on and on, and in the end, created the sort of record, which was always expected of him.

McCullum’s Test numbers may not be up there with the best in the business. But, history will still judge the New Zealand skipper rather fondly, especially for the uncomplicated manner in which he played the game. Virender Sehwag often said that for him batting was all about see ball, hit ball. Things were no different for McCullum. His batting in the last year or so, has only gone notches higher. McCullum’s spanking of bowlers in the 2015 World Cup touched the heights of unbelievable. And, his tremendous hundred at Christchurch remains proof that he is going out of international cricket on a high.

Apart from his batsmanship, McCullum will also be remembered as a captain, for leading his men out of a lean patch in the mid-2000s. He may not be a brilliant tactician, but, like Arjuna Ranatunga did for Sri Lanka, McCullum brought that aggressive streak in the team, which was missing under the sober Daniel Vettori. New Zealand’s self-belief also grew in stature under McCullum’s guidance, which has culminated in an amazing run at home. Under him, youngsters like Trent Boult and Kane Williamson have flourished as well as veterans like Vettori and Ross Taylor. Numbers may not tell the entire story, but McCullum leaves behind a legacy, which New Zealand will look back at with lot of pride.