The tri-series featuring West Indies as hosts along with Australia and South Africa kicks off with the first match between the Windies and South Africa on Friday at the Providence Stadium in Guyana. This will be the first international match for the West Indies after winning the World T20 in India. The same will be the case for South Africa, who were again knocked out early in a global tournament. But, that would have little bearing on the teams when they meet in the 50-over format. The Proteas are much stronger in the format, while West Indies will again miss their big players. 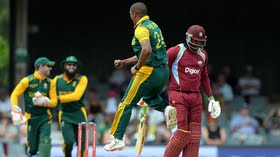 One of the reasons West Indies have been struggling in the 50-over format is because of the impasse between the Windies Cricket Board and the players. As a result, match-winners like Chris Gayle, Andre Russell, Dwayne Bravo, Lendl Simmons as well as T20 skipper Darren Sammy remain out of the team when it comes to ODIs. In the absence of the abovementioned names, West Indies will be significantly weakened. Incidentally, Sunil Narine and Kieron Pollard, both of whom were not part of Windies’ World T20 winning squad have been selected. Both failed in IPL, so they will be under pressure.

There are a few experienced players in the side, who will need to put their hands up. A lot will depend on Marlon Samuels in the batting department. He had a mixed World T20, but if he gets his act right, he could prove to be a threat for South Africa. Denesh Ramdin, Andre Fletcher, Darren Bravo and Johnson Charles are the other batsmen who will need to fire. A lot of eyes will continue to remain on all-rounder Carlos Brathwaite, even though he had an underwhelming IPL. Jason Holder’s leadership will continue to remain under the scanner.

South Africa would have put behind their World T20 disappointment by now, and will be keen to start afresh. AB de Villiers is one man who will be raring to go. The swashbuckling South African batsman just loves the West Indian attack, and famously broke the record for the fastest hundred while playing against them. South Africa have a strong batting line-up overall too, with the likes of Hashim Amla, Quinton de Kock, Faf du Plessis and batting all-rounder Jean-Paul Duminy in their midst.

The Proteas’ bowling attack will wear a slightly modified look, with Dale Steyn being left out. Morne Morkel should take over as the leader of the attack, with the impressive Kagiso Rabada as his opening partner. Kyle Abott is also in the team, and could be used as the third seamer. But, of course they have the option of Chris Morris as well, who is slowly but surely growing into an all-rounder of repute. In the spin department, the Proteas have chosen left-armer Aaron Phangiso. And, there is also chinaman bowler Tabraiz Shamsi, who could be making his debut, if picked for the Windies match.