Sarfraz Ahmed has been rewarded the Pakistan Test Captaincy after he led the team to an elusive Champions Trophy title in England.

Sarfraz Ahmed has been rewarded the Pakistan's Test Captaincy, a fortnight after he led the national team to an elusive Champions Trophy title in England. 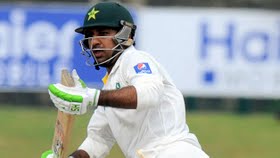 Sarfraz has so far played 36 Test matches for Pakistan and has notched up a total of 2089 runs at an average of 40.96 including three hundreds and 13 half-centuries.

Sarfraz is only the third Pakistan captain to have won a major ICC trophy. Imran Khan led his side to World Cup triumph in 1992 while under Younis Khan, they lifted the World T20 in 2009 edition.

Pakistan Champions Trophy triumph has helped them move up in the World rankings as they moved to sixth spot from No 8 and were under a threat of losing out on direct qualification to ICC World Cup 2019.