All-rounder Ryan McLaren struck a last ball six to help South Africa to a thrilling 1-wicket win in the Third and Final ODI at Potchefstroom. The hosts managed to avoid an otherwise embarassing 0-3 cleansweep against the Black Caps.

All-rounder Ryan McLaren struck a last ball six to help South Africa to a thrilling 1-wicket win in the Third and Final ODI at Potchefstroom. The hosts managed to avoid an otherwise embarrassing 0-3 cleansweep against the Black Caps. New Zealand scored 260 batting first and the Proteas thanks to a 10th ODI century from Graeme Smith and a stunning finishing from McLaren got to the target in the final ball of the match.

The Kiwis batting first lost four key wickets for just 68 runs with a poor run rate having won the toss and electing to bat first. Kane Williamson, who scored a century in the previous game, and Skipper Brendon McCullum were amongst the batsmen to get out early. SA couldn’t go onto put the Black Caps on the mat as Grant Elliott and Colin Munro put on a superb fighting stand. Elliott scored 54 from 67 balls (with 8 fours) before he was caught upper cutting to thirdman having taken the Kiwis to 129 for 5 by the 34th over.

Colin Munro, just 25 years of age, turned out to be a sensation for the Kiwis in this game as he took time to settle down but ended up playing shots all around the park to come up with 57 from 62 balls with 6 fours and a six. James Franklin brought all his experience into play to stay right till the end to score a crucial 53* (from 52 balls with 3 fours and a six) to help the Kiwis reach 260 for 9 out of nowhere.

The South African bowling was simply erratic and they nearly took four hours to bowl their quota of 50 overs! The four-men pace attack conceded as many as 17 wides! The wicket takers were two of the pacers – Lonwabo Tsotsobe and Ryan McLaren taking four scalps each. 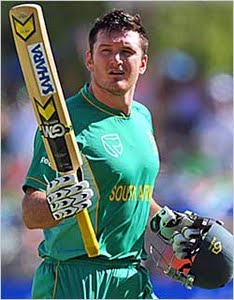 Chasing 261, South Africa got off to a perfect start of 83 in 15.3 overs before Quinton de Kock (31 from 38 balls) threw his wicket away attempting a slog. Former Skipper Graeme Smith hung in there to keep it going at his end although the batsmen at the other end failed to keep the scoreboard ticking. South Africa struggled in the middle overs to move to 174 for 4 in the 37th over when Kane Williamson pulled off a superb diving catch to his left. Graeme Smith was forced to stay right till the end as he was hardly getting any stability at the other end. Smith went onto score his 10th ODI hundred and he kept the Proteas’ hopes alive until he erred in one shot and holed out to long on off Williamson. Smith scored 116 (from 130 balls with 14 fours) while leaving South Africa at 229 for 6 in 45.4 overs.

The Kiwis with their never-say-die attitude chipped away with two more wickets and the last over was tensely poised with 8 runs to get. Luckily, the South Africans had Ryan McLaren who was striking the ball well. The match went till the wire with 3 runs to score from the final ball and McLaren shuffled back a long way across his stumps and played a paddle pull off Franklin which sailed over short fine leg for a stunning six! McLaren finished the game in style with an unbeaten 25 from 24 balls.