In what was a disappointingly one-sided affair, India thumped New Zealand by eight wickets in the second one-dayer at the Shaheed Veer Narayan Singh International Stadium in Raipur on Saturday, January 21.

Bowling first after winning the toss, India bundled out the visiting side for a paltry 108 in 34.3 overs. Mohammed Shami was the star of the show for the Men in Blue with figures of 3 for 18. He dismissed Finn Allen for a duck in the first over and followed it up with the scalps of Daryl Mitchell (1) and Michael Bracewell (22).

At the other end, all-rounder Hardik Pandya shone with 2 for 16 in six overs, three of them being maidens. Washington Sundar was aided with two easy wickets as Glenn Phillips (36) and Lockie Ferguson (1) pulled long hops straight to the fielder on the boundary. Mohammed Siraj, Shardul Thakur and Washington Sundar picked up one wicket each.

Chasing 109, India got home in 20.1 overs, losing only two wickets in the process. Men in Blue skipper Rohit Sharma top-scored with 51 off 50, while Shubman Gill remained unbeaten on 40 off 53. Virat Kohli was the second wicket to fall in India’s innings, stumped off Mitchell Santner’s bowling for 11. 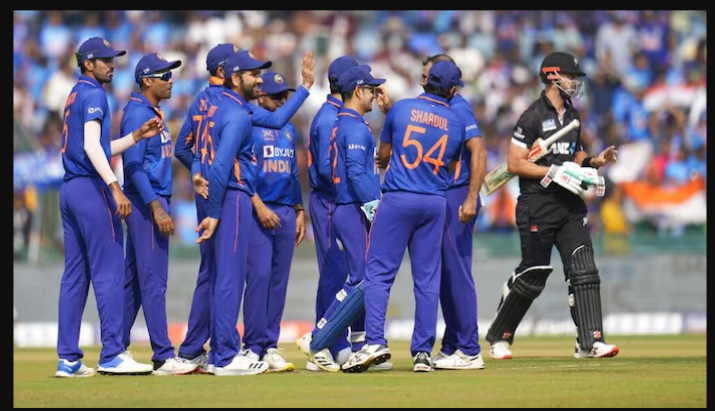 Reflecting on the series-grabbing win, Rohit hailed the bowlers at the post-match presentation ceremony. He said, “The last five games, bowlers have really stepped up. Whatever we have asked of them, they have stepped up and delivered. You don't usually see this type of seam movement in India, you generally see it outside India. These guys have some serious skills, they work really hard and it's great to see them being rewarded. We trained yesterday and the ball was nipping around under lights.”

Admitting that chasing around 250 would have been challenging on the Raipur surface, the 35-year-old added, “It might have been challenging for us but that was the point of opting to chase. We batted first last game, so the idea was to challenge ourselves. Not sure what I'll do at Indore (in the final game). The confidence is high within the group and that's great to see.”

Stating that both Shami and Siraj wanted to bowl more overs, Rohit explained that he denied the request, keeping workload management in mind. The Indian captain elaborated, “They (Shami and Siraj) were raring to keep bowling long spells but I reminded them that there is a Test series coming up as well (Australia at home), so we need to take care of themselves as well.”

The third ODI of the three-match series will be played at the Holkar Cricket Stadium in Indore on January 24.