It is highly unfair on a team when they win all their matches going into the final, but one bad day in the summit clash costs them the tournament.

It is highly unfair on a team when they win all their matches going into the final, but one bad day in the summit clash costs them the tournament. In India’s case, it were just a few poor overs that made the difference between victory and defeat for them. But, that is the harsh nature of sports sometimes. The fact of the matter is that Sri Lanka outplayed India in the final on Sunday, and deservedly laid their hands on the trophy to give two of their stalwarts a fitting farewell. 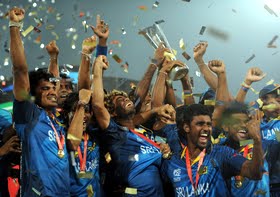 Sri Lanka were lucky with the toss, and they made the sensible decision of putting India in. It is a well-known fact that India are masters of chasing and batting first they could be found out. The match was evenly poised at the halfway stage. It were the last five overs really where India completely lost it. Lasith Malinga and Nuwan Kulasekara combined magnificently to bowl yorkers outside the off stump, and the Indian batsmen had no answer to this Lankan ploy. They knew what the bowlers were attempting, and yet could not figure out a way to deal with the same.

In hindsight, the lacklustre innings of Yuvraj Singh completely undid all the great work of Virat Kohli. One man cannot be blamed for India’s defeat in the final, and Yuvraj’s failure was definitely not for lack of effort. He just couldn’t get his timing right on the day. It was just one of those days where whatever he tried did not come off. Yuvraj has played many great knocks for India in the past, but this definitely wasn’t his day. Unfortunately for India, the knock came in the final, and took away all the momentum the Indian innings had.

The Indians could still have made a match of it had they bowled superbly. But, despite their best efforts, the former defending champions fell short, for Lanka were inspired to win this. Fittingly for Sri Lanka, it was the partnership between Mahela Jayawardene and Kumar Sangakkara that put them on the winning track. Sangakkara had been struggling for all series, but like a true legend he delivered when it mattered the most. His knock ensured that Lanka got home with ease. Even though Jayawardene fell with the target still a way away, Sangakkara guided them home with ease.

The decision to promote Thisara Perera in at a crucial stage could have been a double-edged sword, but the move worked in Lanka’s favour, and completely shut India out of the game. Perera has been India’s nemesis over the years, and he ended up being one again. The Indian spinners needed to be at the best if the bowling side hoped of pulling off a surprise win. But while Ravichandran Ashwin was effective, he could grab only one wicket, and Amit Mishra had a second poor game in a row. The bowlers cannot be faulted though, for they just weren’t given enough runs to play with.