A superb partnership between Younis Khan and Asad Shafiq rescued Pakistan to 253 for 5 on the opening day’s play of the Second Test at Newlands in Cape Town. Both the middle order batsmen scored centuries as Pakistan fought back to recover from a disastrous position of 33 for 4 after they were put into bat first by Graeme Smith.

A superb partnership between Younis Khan and Asad Shafiq rescued Pakistan to 253 for 5 on the opening day’s play of the Second Test at Newlands in Cape Town. Both the middle order batsmen scored centuries as Pakistan fought back to recover from a disastrous position of 33 for 4 after they were put into bat first by Graeme Smith.

It was the new ball that did all the damage to the visitors. The first breakthrough for the Proteas came in the 8th over when Nasir Jamshed (3) was forced to edge Philander to the keeper. Steyn removed the other opener Hafeez (17) who dabbed an away swinger to the slips. The third wicket fell in the 17th over when a hard-working Azhar Ali was caught behind after being lured into a false drive to a pitched up delivery from Morkel. Three balls later, Morkel got Misbah-ul-Haq tamely fending off his rising delivery to shortleg for a duck. 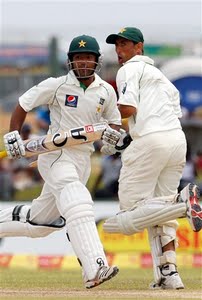 Pakistan went to lunch at 60 for 4 but did not lose a single wicket in the afternoon session after the ball lost its shine to allow Younis and Shafiq to blossom. South Africa couldn’t make any further inroads as the slow pitch flattened out to allow Younis Khan and Asad Shafiq score centuries. For Younis, it was a 21st hundred in Tests while it was only a 3rd Test century for Shafiq. With the second new ball, South Africa could finally break this stand which was worth 219 with Younis Khan caught behind off a bat pad inside edge to a Philander indipper. It was only a review that helped the Proteas get the wicket of Younis (111 from 226 balls with 7 fours 3 sixes) after an initial lbw appeal was given not out and replays revealed that he was actually caught behind off an inside edge.

Asad Shafiq survived the day to remain unbeaten on 111 (from 229 balls with 14 fours and a six). South Africa still have the edge as the remainder of the Pakistani batting looks very vulnerable including Wicket Keeper Sarfraz Ahmed who doesn’t look like a capable batsman at this level.

Toss and Teams: South Africa have won the toss and asked Pakistan to bat first in the second Test at Newlands in Cape Town under overcast conditions. Pakistan have made two changes with the 7ft 1” debutant Mohammad Irfan and Tanvir Ahmed replacing the injured Junaid Khan and Rahat Ali. South Africa who won the first Test by a big margin remain unchanged.