India defeated New Zealand by an impressive margin of 321 runs at Indore on Day 4 to claim the series 3-0. We take a look at significant moments in the match as well as some interesting stats

India defeated New Zealand by an impressive margin of 321 runs at Indore on Day 4 to claim the series 3-0. We take a look at significant moments in the match as well as some interesting stats.

Massive Kohli-Rahane stand: This was undoubtedly the partnership that set up the victory for India. Skipper Virat Kohli and his deputy Ajinkya Rahane joined forces in the first innings when India were in a not too comfortable 100 for 3, having lost openers Vijay, Gambhir and Pujara as well. But, Kohli and Rahane not only resurrected India, but put them in an impregnable position from where they could dominate, adding 365 for the fourth wicket. Kohli went on to slam his second double hundred while Rahane missed his maiden 200 by 12 runs. They did more than enough to put India in the driver’s seat though. 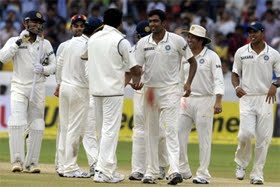 Tom Latham may not be among New Zealand’s most destructive batsman, but he has definitely earned a reputation as a dogged batsman. In the first innings at Indore as well he held fort for the Kiwis. He and Martin Guptill added 118 for the opening wicket in response to India’s 557 for 5. Latham’s wicket however fell at that point, to Ashwin for 53, and led to a New Zealand collapse. From 118 for 1, the Kiwis soon crumbled to 148 for 5, Ashwin claiming three of the four wickets to fall.

India were already in a great position when they decided to bat a second time. But, they still needed someone to come up with a significant knock so that they could set up an unassailable target for the Kiwis. Cheteshwar Pujara took up the responsibility, and came up with a fine 101 from 148 balls, remaining unbeaten when India declared, and set New Zealand 475 to win.

The struggling Ross Taylor came in and started firing on all cylinders. He even took on Ashwin, and 27 from 32 balls with five fours. But, he was cleaned up by the offie next ball, as he tried to slog sweep, only to be bowled. New Zealand were 80 for 3 when Taylor was bowled, and ended up getting all out for 153, Ashwin finished with 7 for 59.

Ashwin’s match figures of 13 for 140 are now his best in Test matches. He previous best was also against New Zealand –12 for 85 in Hyderabad in 2012. His 7 for 59 in the second innings are also his best figures in an innings, bettering his 7 for 66 against South Africa at Nagpur in November 2015.

The 321-run win is India’s second-biggest in terms of runs. The biggest remains the 339-run triumph registered against South Africa in Delhi in 2015.

This is the fourth instance of India registering a whitewash in a series of 3 or more matches. Previous ones were against England and Sri Lanka (3-0) in 1993, and against the Aussies (4-0) in 2012-13.