A strong bowling performance saw Kolkata Knight Riders storm into the Final of IPL 7. Hosts Kolkata Knight Riders defeated the fancied Kings XI Punjab by 28 runs in the first qualifier match at the Eden Gardens on Wednesday evening. Kings XI Punjab will have another chance to make it to the final if they go on to win in the second qualifier match.

Earlier, KKR finished with a competitive total of 163 for 8 thanks to a crucial cameo of 17 not out from 9 balls by Piyush Chawla. Kings XI Punjab were jolted early with Virender Sehwag falling in the 2nd over. The other opener Manan Vohra scored 26 from 19 balls with three sixes before he miscued a pull off Morne Morkel in the 6th over. All this happened at a time when rain threatened to disrupt play and the pressure was on both the sides to watch the Duckworth/Lewis par total. 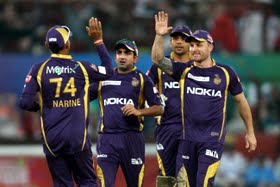 Big gun Glenn Maxwell failed again after shuffling far too across in a flick off Umesh Yadav leaving his team at 55 for 3 in 7.5 overs. Wicket Keeper Wriddhiman Saha batted impressively scoring 35 from 31 balls. Saha and David Miller got out in the space of three deliveries as Kings XI slipped into a losing position of 82 for 5 in 12.2 overs.

Skipper George Bailey was the lone man left for Kings XI to take them to victory but by then the match had slipped away. Bailey scored 26 from 17 balls while Kings XI Punjab finished with 135 for 8. Umesh Yadav collected the Man of the Match award for his superb spell of 4-0-13-3.

Update at 5:30 pm IST: Rain has stopped play at the Eden Gardens after 15.4 overs of the Kolkata Knight Riders innings. The homeside have been pegged back to 113 for 5 despite some fantastic batting by Robin Uthappa, the man in form. The difference though is that Robin Uthappa couldn’t last the distance and got out for 42 from 30 balls with 4 fours and 2 sixes.

Put into bat first by Kings XI Punjab, KKR had an early casualty losing Skipper Gautam Gambhir in the 2nd over. In the 9th over, KKR lost the wickets of Uthappa and Manish Pandey to Akshar Patel. In the 15th over, Shakib Al Hasan and Yusuf Pathan got out trying to play big shots in consecutive deliveries from leg-spinner Karanveer Singh.

This Qualifier 1 match was originally scheduled to be played yesterday but was postponed today because of torrential rains in Kolkata.