England crushed arch-rivals Australia by 48 runs at Edgbaston in Birmingham in their Group A Match of the ICC Champions Trophy 2013. James Anderson bowled magnificently taking 3 for 30 as England completely strangled the fragile Australian batting unit.

England crushed arch-rivals Australia by 48 runs at Edgbaston in Birmingham in their Group A Match of the ICC Champions Trophy 2013. James Anderson bowled magnificently taking 3 for 30 as England completely strangled the fragile Australian batting unit. There were a couple of 50s from the Aussie camp but England’s target of 270 was never threatened. Ian Bell was the Man of the Match setting up England nicely with his 91.

It was an un-Australian type of performance from Bailey’s men with the bat. David Warner, who has been hugely inconsistent in all formats of the game for whichever team he plays, was first to depart caught behind playing a flashy drive off Stuart Broad in the 6th over. Australia never got any momentum in the early overs and in the 15th lost their other big player Shane Watson (24 from 40 balls), caught bat pad at gully to an inswinger from Tim Bresnan. Australia had just the 47 runs on the board at that point of time.

The Aussies continued to crawl after losing their two stars and in the 26h over, the promising Phil Hughes (30 from 55 balls) was dismissed lbw to an arm ball from Joe Root which the left hander was looking to pull. Australia going nowhere lost three wickets in succession in the middle overs – Voges (bowled by Bresnan in an attempted big hit), Marsh (playing an uppish backfoot drive to point off Anderson) and Wade (edging behind a late outswinger from Anderson). It was match over at 136 for 6 in 36 overs.

Skipper George Bailey helped himself to a 5th ODI fifty, scoring 55 from 69 balls before perishing in the 40th over. Australia eventually finished with 221 for 9, which was well short of their target. James Faulkner showed his all-round talent by smashing a maiden ODI fifty, scoring 54 not out from 42 balls (with 5 fours and a six).

Australia’s defeat was mainly because of James Anderson who went onto become the highest ODI wicket taker for England surpassing Darren Gough during the course of the match. Anderson took 3 for 30 in 10 overs. Broad and Bresnan complemented him with their stump to stump bowling.

Earlier, England through a conservative approach had left Australia with a target of 270 on what looked to be a flat batting surface at Edgbaston. 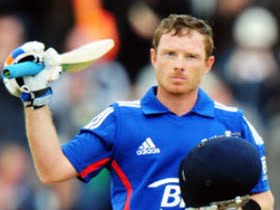 Ian Bell top scored for the homeside with 91 from 115 balls (7x4s) to play the sheet anchor’s role. The hosts got off to a solid start of 57 for 1 in 11.4 overs with Alastair Cook (30 from 42 balls) first to depart, edging a drive off Watson to the keeper. Jonathan Trott joined Ian Bell and the partnership was pretty boring to watch and was as if the duo were playing Test Cricket in colour clothes. They steadily took England to 168 for 2 in the 34th over before Trott (43 from 56 balls) edged his cut off Starc to the keeper.

Ian Bell missed out on what could have been his 4th ODI hundred when he was beaten for pace by a full length delivery from James Faulkner to leave the hosts well placed at 189 for 3 in the 38th over. England was under pressure after Bell’s exit losing three key wickets in succession – Root (caught at mid wicket flicking McKay), Morgan (bowled round his legs trying a sweep off McKay) and Buttler (bowled by dragging a drive off Faulkner).

Australia missed a trick or two after reducing England to 213 for 6 in 43.1 overs. England thanks to its good batting depth ended up with a healthy total of 269 for 6 with Ravi Bopara playing a crucial cameo of 46* from 37 balls.

Toss and Teams: Hosts England have won the toss and elected to bat first against Australia at Edgbaston in Birmingham. England have left out Graeme Swann, who is slightly injured and Steven Finn. For Australia, Skipper Michael Clarke misses out with a back injury. The pitch looks dry and good for batting.