Rayudu is someone I rate very highly: Dhoni

Chennai Super Kings captain Mahendra Singh Dhoni praised Ambati Rayudu after his team defeated Sunrisers Hyderabad, on the back of a hundred from him. Rayudu made 100 not out from 62 balls as Chennai chased down 180 with ease.

"Even before IPL started I had to make space for Rayudu, because he is somebody who I rate very highly. He can play both the fast bowlers and spinners very well. Most teams look to exploit the opener with spin bowling. He is someone who doesn't look like a big-hitter but almost clears the field every time he plays the big shot," Dhoni was quoted as saying in a PTI report. 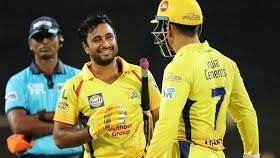 Dhoni expressed surprise at the lack of swing when his side batted. "I thought the ball will swing more in the second half than what it did for us. The swing was not there, that was a surprise. We got off to a good start. Watson and Rayudu hit boundaries whenever there was an opportunity. Otherwise 180 against SRH would have been a tough chase," the Chennai skipper stated at the post-match presentation ceremony.

Man-of-the-match Rayudu was also pleased with his effort and also the fact that he is opening.” I am enjoying it right now. There's no secret. I was ready to open. If you are good at four-day cricket, you can bat at any position," he said.