Since the time he has made his comeback, he's been brilliant: Rohit Sharma hails Hardik Pandya after Asia Cup 2022 win over Pakistan

Team India captain Rohit Sharma praised Hardik Pandya for his all-round show in the Asia Cup 2022 match against Pakistan in Dubai on Sunday (August 28). India beat Pakistan by five wickets in a low-scoring thriller that went into the last over.

Pandya had a brilliant all-round match. He claimed 3 for 25 with his medium pacers after India won the toss and batted first. With the willow, he struck an unbeaten 33 off 17, including the match-winning six under pressure.

Speaking after the memorable win, Rohit said the team was confident of chasing down the target. He asserted, “Halfway through the chase, we still knew that we can win irrespective of the situation. We had the belief and when you have that belief, these things can happen.” 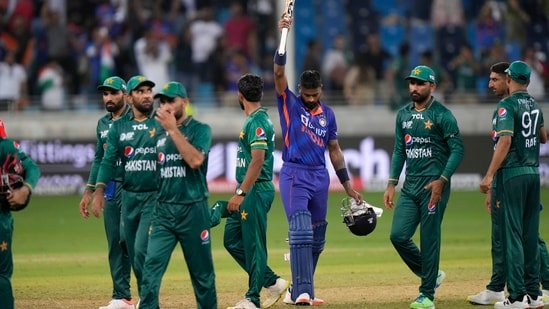 He also hailed Pandya the manner in which he has come back to international cricket after suffering injury and form woes. He said about the all-rounder, “Since the time he (Hardik) has made his comeback, he's been brilliant. When he was not part of the team, he figured what he needs to do to his body and his fitness regime, and now he is clocking 140+ easily.

“His batting quality we all know and it's been brilliant since his comeback. He is a lot calmer now and more confident about what he wants to do, whether it's with the bat or with the ball. He can bowl really quick, we saw that today with those short balls,” he added.

“It was always about just understanding his game and he's doing that well now. In a high-pressure chase with 10 rpo needed, you can panic but he never showed any of that,” he continued.

On his own captaincy, Rohit said that it is all about giving clarity to the guys so that they know their roles well. He admitted, “It was a bit challenging but I'll take wins like this any day over usual victories.”

Rohit also praised the bowling attack for standing up in the absence of Jasprit Bumrah and Harshal Patel. He said, “Yes, they (India's pace bowling) have come a long way in the last year or so and they have adapted well to different situations.”

India next match in Asia Cup 2022 will be against Hong Kong in Dubai on Wednesday (August 31).