The 2019 World Cup kicks off with dangerous hosts England taking on perennial underachievers South Africa in the tournament opener at the Kennington Oval in London.

Having been knocked out in the first round in 2015, things have changed dramatically for England. They now possess arguably the most dangerous batting outfit in world cricket. Jos Buttler with his incredible hitting has been one of the big factors in the hosts' resurgence. But, he is not alone --Jason Roy, Jonny Bairstow, Joe Root and skipper Eoin Morgan himself are all proven match-winners with the bat.

Speaking of Morgan, he must be given some credit for changing the face of English with his brave and refreshing leadership. The newfound attitude has seen England break the record for highest ODI score twice, which now stands at 481 for 6, and they seem gung-ho on becoming the first team to break the 500-run barrier.

In the bowling, a lot of eyes will be on Jofra Archer, who was drafted into the squad after missing out on selection in the preliminary team announced for the tournament. Archer has shown in his short stint in international cricket that he could be a key player for England. 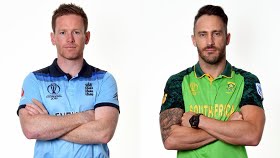 South Africa, as always, go into the World Cup with the tag of chokers behind them. So often have they faltered on the big stage, this time they aren't even among the favorites. The Proteas would hope the lessened expectations work in their favor. They have never made it past the semi-finals in the event so Faf du Plessis' men have plenty to prove.

The Proteas would definitely miss AB de Villiers, their star performer of the last decade who quit international cricket much before the World Cup. There would thus be additional responsibility on Faf himself apart from Hashim Amla, who made it to the team on the back of his vast experience despite a poor run in recent times.

Quinton de Kock is another senior South Africa will look up to for he has raised his game in recent times impressively well. JP Duminy, who quit Test cricket to focus on the World Cup, gets a chance to prove his worth one last time. Then, there is also David Miller, who can be most destructive on his day. While South Africa has got used to missing Dale Steyn due to injury (he won't be available for England clash due to a shoulder injury), Kagiso Rabada will hold the key to South Africa's chances with the ball, apart from veteran spinner Imran Tahir.