Having been battered at Mumbai, India fought back in comprehensive fashion at Rajkot to square the three-match ODI series against Australia 1-1.

Having been battered at Mumbai, India fought back in comprehensive fashion at Rajkot to square the three-match ODI series against Australia 1-1. Sent into bat after losing the crucial toss, India posted an impressive 340 for 6 on the board. Shikhar Dhawan top-scored for India with 96 from 90, and featured in a crucial opening stand of 81 with Rohit Sharma.

With the number three experiment abandoned, skipper Virat Kohli walked in at his customary position and scored a fluent 78 from 76 before, once again, falling to Adam Zampa. It was KL Rahul’s innings thought that gave India the much-desired push as he went berserk in the slog overs. Rahul blazed away to 80 from merely 52 balls, smashing six fours and three sixes as India touched the 340 marks.

For Australia, Steve Smith was yet again the thorn in India’s flesh with 98 from 102 balls. However, he did not find much in terms of support as Australia fell short by 36 runs. Apart from Smith, who was bowled by Kuldeep Yadav two short of a hundred, Marnus Labuschagne contributed a fluent 46 from 47 balls. India though kept chipping away at the wickets and never allowed the Australian batsmen the upper hand. Mohammed Shami claimed three wickets for India while Kuldeep Yadav, Ravindra Jadeja and Navdeep Saini grabbed two each. 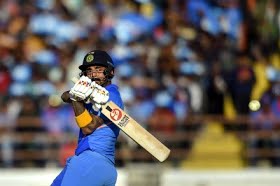 Following the victory, skipper Kohli was lavish in his praise of Rahul. “It's important to not leave someone like KL out. You saw how he batted today. This is probably the best he's played at the international level. The knock showed maturity and class, and we know exactly what we're doing in the dressing room. KL is becoming a multi-dimensional player (he kept wickets), and it's really great when players step up like this,” Kohli said.

On Dhawan’s return to form, Kohli added “An important couple of games for Shikhar. He was injured for a long time and in ODIs he's been one of our most consistent and aggressive performers, and he can change the situation for the team. It augurs well when the two openers are so good together.”

Speaking about the bowling plan, the captain revealed that yorkers were the order of the day “I asked the bowlers what they wanted to do and they said this was the time to execute the yorkers. All three of them were really good with the yorkers, particularly Shami who changed everything in that over,” the skipper explained.

Man of the match Rahul, who batted at five, stated that he was happy to contribute to the team in whichever way possible. “I couldn't have asked for a better start. Each day I've been thrown different roles and responsibilities and I'm enjoying it for now. Batting at 5, I wanted to give myself a few balls, you know what the wicket is doing and Virat said that it's coming on nicely. A few came off the middle, and I was confident I could score, and everything else faded away,” Rahul said

On his wicket-keeping stint, he added, “Kuldeep told me my 'keeping was good too. I grew up 'keeping but I didn't do it a lot for my first-class team, but in the last few weeks I did keep for Karnataka, so I've been in decent wicket-keeping touch, so hopefully I can keep my spinners and fast bowlers happy.”