After India’s Adelaide win, Ravi Shastri says, ‘to hell with the nets’

On being asked how India will celebrate after the team’s famous win over India, Team India coach Ravi Shastri responded saying

On being asked how India will celebrate after the team’s famous win over India, Team India coach Ravi Shastri responded saying, "To hell with the nets." India won the first Test at Adelaide by 31 runs. 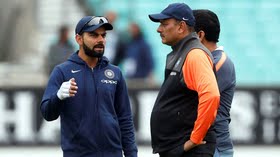 India will now head to Perth for the second Test from December 14. Shastri feels the team needs some well-deserved rest. "They have to rest up, to hell with the nets. You just come there, mark your attendance and get away to the hotel. We know the Perth track is quick, it's a drop in surface, there will be something there for the fast bowlers,” he added in the PTI report.

The coach though wants the other batsmen to learn from Cheteshwar Pujara, who stood out in both innings at Adelaide. "There was some rash shots played in the first innings, that was foolish cricket, but they learnt from it. Pujara was absolutely magnificent, we've asked him to be a little more upright to counter bounce in these conditions."