Alviro Petersen played a knock that could reshape his career

Going into theHeadingey Test, South African opener Alviro Petersen was the player under extreme pressure from the Proteas camp. The others who batted at Leeds got score of 131, 311 and 182. Even going into this series, Petersen’s place in the squad wasn’t certain.

Going into theHeadingey Test, South African opener Alviro Petersen was the player under extreme pressure from the Proteas camp. The others who batted at Leeds got score of 131, 311 and 182. Even going into this series, Petersen’s place in the squad wasn’t certain. Yes, he did have three Test tons to his name, but his consistency remained a question mark. Also, the benchmark for an opener set by Graeme Smith and A B de Villiers and before them Smith and Herschelle Gibbs was rather high. This is also one of the key reasons why Petersen’s failures have been magnified in spite of the fact that he has a decent Test record. 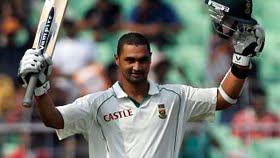 In a way, unfair pressure has been put on the opener. After all, he is still only into his second year in international cricket. His wonderfully compiled marathon innings at Headingley could go on to become the redefining knock of his career, provided Petersen builds on this success. There was lot to admire about Petersen’s innings that lasted for a better part of two days of Test cricket. The ton came against the number one team in the world, and going by that principle, against the toughest bowling attack in the world.

England had the early advantage having won the toss and putting South Africa in under somewhat bowler-friendly conditions. On form, the left-handed South African skipper Smith was expected to do the bulk of the early scoring. In a surprise of sorts, Petersen it was who took on the England bowling and gave the visitors the early advantage. In a way, Petersen’s attack on the English bowlers made them look vulnerable and out of place since they did not expect to get such stiff opposition from Petersen.

What made the South African opener’s knock ever more credible was the fact that none among the other more-celebrated batsmen in the Proteas line up managed to come up with a substantial score. Smith supported Petersen early on, but could not convert his half-century into a ton. Among the rest, Hashim Amla had a rare failure while A B de Villiers, Jacques Kallis and Jacques Rudolph could not do much. And, had it not been for J P Duminy’s knock down the order, South Africa would have been dismissed under 400. The failures of the bigger guns makes Petersen’s knock even more special.

Sometimes during a struggling phase, batsmen come up with a knock that turns a new chapter in their career -- for Matthew Hayden it was 119 at Mumbai in 2001, for VVS Laxman it was 167 at Sydney in 2000. Will it be 182 for Alviro Petersen at the Headingley in 2012? Time will tell, for sure.