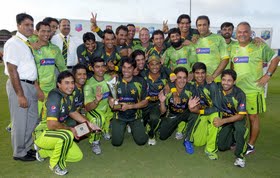 "Today we lost," says Dwayne Bravo, "but the guys fought. You have to give credit to them. Must congratulate Pakistan, and well done to my boys too. The matches could have gone either way. Even today a few key decisions went against us. We can't fault the effort of the players. The series could have gone our way if some key decisions had gone our way. If you bowl well, 242 was going to be a challenging total. I liked how we believed right until the end. Those key decisions at crucial times cost us. A learning process to me. A new role for me. With the talent we have, I enjoy leading the team. We can't turn things around overnight, but with the talent we have we can become a very dangerous team."

"Pretty satisfying," says Misbah-ul-Haq, who is also the Man of the Match and Series. "A win is always good, especially after the losses in South Africa series and Champions Trophy. I knew this pitch was really good to bat on, and if we kept batting till the end, nothing was impossible. The bowling has obviously been our strength. Everybody bowled really well, which was the key in this win. Always tough to bowl first, especially in pressure games like this, but everybody was really positive, that we were going to chase well."

Fifth time in the series, the captain winning the toss put the opposition in.

Pakistan lead the series 2-1, and West Indies need to win to avoid their third successive home bilateral ODI series loss to the visitors.

2. Including the fourth game, Gayle has batted at No. 5 only eight times in 248 ODI innings.