SSC Test: Herath once again stood up and made the difference

At the beginning of the series, it was clearly stated that Australia would be favourites to win the series, but also that things could change quickly if Rangana Herath gets his act right. For the third time in the series, at Colombo

At the beginning of the series, it was clearly stated that Australia would be favourites to win the series, but also that things could change quickly if Rangana Herath gets his act right. For the third time in the series, at Colombo, he stood up for the team's cause, and his reward was a 3-0 whitewash of Australia as well as the man of the series award, and deservedly so. His 13 wickets in the Colombo Test, including 7 in the second innings went a long way in ensuring Sri Lanka achieved the historic clean sweep. This is perhaps the greatest moment in Sri Lankan cricket after their 1996 World Cup triumph.

While he was on top of his game in the first two Tests, Herath, it seems had reserved his best for the last. On the final day, with Sri Lanka having declared, they were looking up to Herath to finish off things. And, he did not disappoint, bamboozling the Australians with his spin and variations. The mode of his victims were also versatile, which prove he brought out all the tricks up his sleeve. Steven Smith was out trying to cut, Adam Voges was trapped lbw with one that straightened. Further, Mitchell Marsh was caught behind off the turning ball while Peter Nevill top-edged a sweep. The tail too was quickly blown away.

The story of the match for Sri Lanka was as much about their fightbacks as it was about Herath. On the opening day of the Test, Sri Lanka were in complete strife having lost half their side inside the first session. At that point, their hopes of a clean sweep seemed like a distant reality. But, Dhananjaya de Silva and Dinesh Chandimal batted brilliantly to lead the counter-attack. de Silva made his debut in the first Test of the series and, for him to play a knock of such high quality augurs really well for the team. Chandimal has featured in a few turnarounds for Sri Lanka, and he would have been elated to be a part of another. His maturity came to the fore as he held one end up on day 1.

In the second innings as well, Sri Lanka found a hero in Kaushal Silva. He had struggled very badly in the series prior to that, and had failed to reach even double figures before that. But, the first time he reached double figures, he converted that into a hundred. It went a long way in Sri Lanka gaining the upper hand in the match. For someone who was struggling so badly to come up with a match-defining knock was a praiseworthy effort, and shows how strong mentally he is. Chandimal again played a fine supporting hand as Sri Lanka set Australia an improbable target. Herath did the rest. 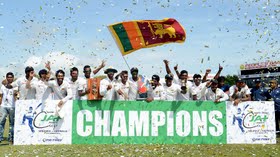 As for Australia, unlike the previous Test, where they were completely outplayed, they had their chances on this occasion, but failed to grab them. After picking up five early wickets on the opening day, they should have keep Sri Lanka down to a low total. Instead all the early good work by Mitchell Starc and Nathan Lyon was undone as Sri Lanka fought back. Then, with the bat, they put themselves in a superb position to take a huge lead thanks to tons from Steven Smith and Shaun Marsh. But, they crumbled after that in incredible fashion to lose the advantage. The collapse also broke Australia's spirit.