South African all-rounder Albie Morkel turns 31 today, which makes it an apt moment to look back at what has been a disappointing start-stop international career for the humungous talent.

South African all-rounder Albie Morkel turns 31 today, which makes it an apt moment to look back at what has been a disappointing start-stop international career for the humungous talent. Since making his debut in 2004, the left-handed batsman and right arm medium pacer has featured in only 58 ODIs and 35 T20s for the country, which is a rather disappointing stat. Even more worrisome are his returns in these games. In ODIs, he averages an ungainly 23 with the bat even though he possesses a strike rate of 100. With his bowling as well, he has picked up 50 wickets at a rather high average of 38. His figures are only slightly better in T20 -- a batting average of 24 with a strike rate of 144 and a bowling average of just over 36. 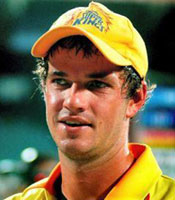 The above numbers may suggest that Morkel hasn’t done justice to his potential. While there is a lot of truth in it, there is also another side to the story – that of the South African management not utilising his services well. More often than not, Morkel has had to come in with only a few overs left and has been forced to throw his bat around. In the process, it added up to a number of single figure score, a fact that eventually went against him, even though it wasn’t entirely his fault.

When you have players like Morkel who are genuine match-winners, you ought to take the risk of giving them more chances despite their repeated failures. Unfortunately, Morkel hasn’t had that liberty even though he has played a couple of unbelievable knocks in high-pressure situations for the team. Instead, he has found himself on the sidelines for a major portion of the last half decade, even as he has been one of must visible faces of his IPL franchise, the Chennai Super Kings.

Like South Africa, even Chennai haven’t utilised Morkel’s performance to the maximum. However, they have rarely kept him out of the eleven, knowing fully well that even ten minutes of Morkel magic can turnaround the game. In the IPL match against RCB, Morkel lasted just seven balls but blasted 28 runs to shell shock Bangalore. It is the kind of stuff he has done for the Proteas as well, but not consistently enough. Morkel has been at fault on some occasions, but if South Africa can give him the confidence and back him, there is no reason why he cannot produce more such blitzkriegs at the international level as well.

Even since the sacking of Lance Klusener, South Africa have struggled to find a decent batting all-rounder. Morkel was touted as the next Zulu, but hasn’t quite lived up to the billing. He still has age on his side though, and with better support from the team management, he could still end up being one of world cricket’s most dangerous finishers.