Despite ban, Andre Russell's lawyer bats for him

Although West Indian all-rounder Andre Russell has been banned for a one-year by an anti-doping tribunal, his lawyer, Kingston's Patrick Foster maintain that his client is innocent. Foster described Russell as a clean athlete

Although West Indian all-rounder Andre Russell has been banned for a one-year by an anti-doping tribunal, his lawyer, Kingston's Patrick Foster maintain that his client is innocent. Foster described Russell as a clean athlete, and went on to add that he did not agree with the ban handed over to the talented cricketer. The tribunal had found Russell guilty of failing to file his whereabouts three times back in 2015. And, as per the World Anti-Doping Agency code, three misses in a year is equal to one failed dope test.

Foster issued a media release, and admitted that they are considering appealing against the verdict. "Mr Russell and his legal team are carefully reading and reviewing the ruling as regards the next steps and the possibility of an early appeal of the decision of the Panel's ruling," Foster said. "While we respect the ruling, we respectfully disagree with it and are very disappointed that the Panel saw it fit to impose a one-year ineligibility period," he added.

During the hearings which happened last year, Russell's legal team denied that the cricketer was "grossly negligent". The team was contesting allegations by the Jamaica Anti-Doping Commission (JADCO). 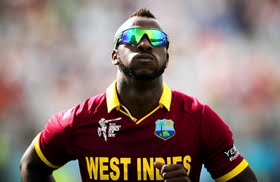 Through the media release, Foster reiterated that Russell has never violated any doping rules. "Throughout his career as an international and domestic T20 cricketer, Mr. Russell has been tested on many occasions by various anti-doping agencies/bodies in several countries pursuant to WADA guidelines and he has never registered an adverse analytical finding," he said.

Foster added that Russell would continue to follow the rules even amidst deliberation of challenging the verdict.

"Mr. Russell is a clean athlete who seeks to uphold the integrity of Cricket. He respects and makes every effort to be compliant with the rules of sport generally, cricket and to comply with anti-doping rules and procedures. Our client will continue to cooperate fully with JADCO and WADA," Foster concluded.