James Faulkner at no.8 played an absolute blinder to steal a certain victory from India in the Third ODI at Mohali. MS Dhoni’s great century went in vain as Faulkner took Ishant Sharma to the cleaners – 30 runs in one over to pull off a shock win.

James Faulkner at no.8 played an absolute blinder to steal a certain victory from India in the Third ODI at Mohali. MS Dhoni’s great century went in vain as Faulkner took Ishant Sharma to the cleaners – 30 runs in one over to pull off a shock win. Chasing 304, the visitors were written off with 44 runs needed from the last three overs but six balls from Ishant Sharma turned things upside down making him a Villain and Faulkner as the new Hero in World Cricket. Australia are now 2-1 up after winning the Third ODI by 4 wickets with three balls to spare thanks to James Faulkner’s blinder of 64* from 29 balls.

Australia were off to another good start from Aaron Finch and Phil Hughes, this time the opening pair added 68 in 12.2 overs. Hughes (22 from 40 balls) departed after edging a forcing late cut off Vinay Kumar to Dhoni. India got back in the contest strongly by getting the key wickets of Aaron Finch and Shane Watson in succession. While Finch (38 from 44 balls with 6 fours) was lbw playing across to an Ishant Sharma delivery, Watson (11) was also lbw, but to Jadeja, playing back to an arm ball. Both the lbw decisions weren’t convincing from the Australian point of view.

The visitors slipped to 88 for 3 in the 20th over but got a fantastic partnership of 83 for the 4th wicket to lay the platform for the remainder of the run chase. Skipper George Bailey and Adam Voges took their time in the partnership but managed to stop the Indians from making further inroads. Bailey was dismissed in the 37th over, lbw to Vinay Kumar after missing a pull to a ball that kept low. 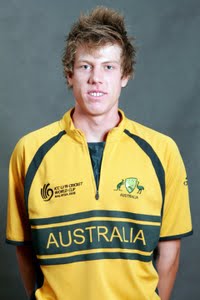 Australia had lost the match it seemed when Glenn Maxwell (3) ran himself out after being sent back from Voges. Brad Haddin came in next, scored a 19-ball 24 before perishing with a big shot at 213 for 6 in the 42nd over. The tourists were certainly out of the equation but James Faulkner had other ideas. Adam Voges kept his end intact to finish with a solid 76* (from 88 balls with 7 fours). Faulkner with two fours and 6 sixes blazed Australia to an unlikely victory with three balls to spare.

Dhoni 's great century lifts India to 303: A mind blowing Captain’s knock from MS Dhoni took India to 303 for 9 in the Third ODI at Mohali. Dhoni walked in with his team in trouble at 76 for 4 in 13 overs. With Kohli, Dhoni steadied India but the hosts were in trouble again as Kohli and Jadeja departed in succession. India from 154 for 6 looked hopeless but MS Dhoni with a 9th ODI century took the total well beyond respectability. Dhoni continued to batter the Aussies even after reaching three figures to finish the innings with an unbeaten 139 from 121 balls with a dozen fours and 5 sixes.

The hosts had a quiet start this time around as the in-form openers Shikhar Dhawan and Rohit Sharma got out inside 7 overs with the score at 37 for 2. Dhawan (8) fell in the 2nd over, forced to edge a late away going delivery from Clint McKay to the keeper. Rohit Sharma was bounced out by Watson who challenged him to pull his short ball and Aaron Finch from slip came up with a good backward running catch.

In the 13th over, Australia had grabbed the initiative in the match with Mitchell Johnson sending off Suresh Raina and Yuvraj Singh in consecutive deliveries. Raina was caught at slip, edging a pull shot from outside off while Yuvraj Singh was out for a first ball duck, poking at a short ball outside off.

India got through a fighting partnership between Virat Kohli and MS Dhoni to come out of a precarious position. The fifth wicket pair added 72 runs before Kohli (68 from 73 balls with 9 fours) edged a backfoot drive off Glenn Maxwell to the keeper in the 30th over. Ravindra Jadeja, who replaced him failed again with the bat, scoring only 2 before fending off a short ball from Johnson in the rib cage to the keeper.

India were down and out at 154 for 6 in the 32nd over but thanks to a gritty partnership between Dhoni and R Ashwin (28 from 35 balls), the innings was resurrected superbly. Ashwin helped Dhoni in adding as many as 76 runs for the 7th wicket. Dhoni ensured that he batted through the 50 overs to power India beyond the 300-run mark. Australia erred slightly by bowling out Johnson early (10-1-46-4) and the lesser pace bowlers were taken to the cleaners by Dhoni. The Indian Captain was dropped on 105 by his Australian counterpart when India were just 267 for 7. The costly drop from George Bailey let off India as they went onto smash a total of 101 runs from the last 10 overs.

Toss and Teams: Australia have won the toss for the third time in a row but this time they have decided to bowl first in the Third ODI at Mohali. Both the sides are unchanged for a third time in a row. The pitch at Mohali is likely to give more balance between bat and ball with some nice grass cover on it.