DC pacers came back exceptionally well to win the match after being out of it for most part of the innings as they gave away only 25 in the final five overs. Shreyas Iyer injured his shoulder in the fifth over and Dhawan led the team in his absence to a fine victory by 13 runs.

Jofra Archer gave Rajasthan a fiery start as he castled Prithvi Shaw on the very first ball of the match, after Shreyas Iyer won the toss and chose to bat first. Fellow opener Dhawan and number three Rahane both looked at sea against the English pacer who gave only 5 runs in his first two overs. Rahane had faced 8 deliveries for his 2 runs, and went for the big hit, only to miscue it to Uthappa at mid on. Dhawan however picked up from where he had left in his last game as he kept on dispatching Kartik Tyagi’s wayward deliveries to the fence.

At 79-2 after 10 overs, DC were rolling along just fine with Dhawan scoring at a rate of 176 and Shreyas settled at run a ball 27. Dhawan got to his fifty but got out immediately after that to a shot which he rarely plays - a reverse sweep. Iyer then took the responsibility of upping the rate as he slammed two sixes of Unadkat in the 15th, also bringing up his fifty. At 129-3, DC were looking set for a total in excess of 180, and that is when we saw some inspired death overs bowling from Tyagi and Archer that blew up all of DC’s big hitting hopes. Tyagi got rid of the skipper Iyer for 53 and Archer got danger man Stoinis for 18 as DC could only manage 32 off the last five with just a couple of boundaries. 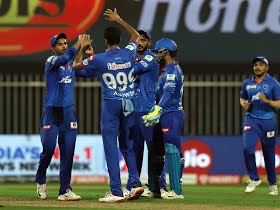 Rajasthan would have fancied themselves to chase this down, considering they chased down a similar score a few days ago against SRH. Buttler and Stokes got them off to a flier with 21 coming from the first two overs. We were in for a riveting contest of Buttler vs Norje in the third over, as Buttler first smoked a six and two fours in the first five balls, but the Nortje came back to castle Buttler on the last ball. He also bowled the fastest delivery in IPL history at 156.22 kmph. Ashwin then scalped Smith cheaply as Delhi were right back in the game after a brisk start by Rajasthan.

Stokes and Samson went after the spinners as runs were flowing with ease and RR reached 81-1 at the nine over mark. It was the debutant Tushar Deshpande who dismissed a well set Stokes at 41(35) with a slower one. Axar then changed the complexion of the game by first getting the danger man Samson out, and then running out last match hero Parag off his own bowling.

Still only 39 were required off the last five and with Uthappa and Tewatia at the crease, RR were the favourites. Ashwin bowled a two run over but it was Nortje who bowled the match turning 18th over as he gave just 4 runs but also got rid of Uthappa for 33(27). Rabada picked up Archer and young Deshpande successfully defended 21 in the final over as Delhi snatched a victory from the jaws of defeat.