Fever pitch: Who said what about the rank turners

Even as India and South Africa prepare to battle it out in the fourth and final Test at the Feroz Shah Kotla in Delhi, with the hosts already having won the series 2-0, the dust over the pitches that were prepared for the earlier games refuses to settle

Even as India and South Africa prepare to battle it out in the fourth and final Test at the Feroz Shah Kotla in Delhi, with the hosts already having won the series 2-0, the dust over the pitches that were prepared for the earlier games refuses to settle. While the Indian think-tank, inclusive of skipper Virat Kohli, Team Director Ravi Shastri and the players have defended the surfaces, blaming poor batting from South Africa for the series loss, a number of former international cricketers, and even the ICC, have lambasted the pitches. Here’s a look at both sides of the controversial coin.

ICC: The Nagpur pitch has been given a ‘poor’ rating by match referee, Jeff Crowe, in his report. The report has been submitted to the ICC, and the BCCI will now have 14 days to respond. Like the Mohali surface, the match at Nagpur also finished inside three days, with India winning thanks to their spinners. The ball started jumping and turning right from day one, and conditions only worsened as the days passed by. 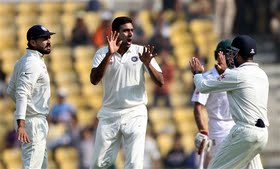 Baffles me why our great game needs to tamper with conditions in favour for results. Amazing quality teams #letitbe@StarSportsIndia

Matthew Hayden on Twitter: How disappointing it is to see the quality of Test Cricket reduced to what we are witnessing #INDvsSA. Baffles me why our great game needs to tamper with conditions in favour for results. Amazing quality teams. Defended the pitch, Shastri said, “Let them sit in Australia and talk about their pitches. Tell them not to waste their time about Indian tracks. Come and play here." Hayden then hit back saying, "After 103 Test matches, I deserve a voice and I will have that for the betterment of cricket.”

Virat Kohli (At a press conference): There have been three scores of under 50 runs (in an innings) in South Africa but I haven't seen any sort of articles on that. Teams have been bundled out under 100 for about six times in South Africa. Never saw any articles written on that. See articles are there to be written. It's a mindset or an opinion of someone. I don't relate to it, I don't understand it and I don't entertain it. It doesn't bother me or the team.

Sunil Gavaskar (To NDTV): Can we not actually be absolutely upright and question the technique of the batsman of both the teams. Why are we shying away from that and blaming the pitch? It is a typical Indian pitch where the ball is going to turn. The demons are there in the batsmen’s mind, the demon is not in the surface.

Kepler Wessels (In column on SuperSport.com): Each country has their preference in preparing surfaces to suit the strength of their team. In South Africa, over the past few seasons, we had two Test matches at Newlands where Australia and Pakistan got bowled out for less than 50. Both Tests came to a swift conclusion.

Ravi Shastri (To cricinfo.com): Nothing wrong with it. I would hope the one in Delhi is absolutely the same. I have no qualms about it.

Hashim Amla (At post-match media conference): The surface was probably the toughest I have had as well, and the cricket itself was really difficult. So credit to India, they kind of bowled well, and unfortunately we ended up on the wrong side of this game.

Faf du Plessis (To cricinfo.com): These have been the toughest conditions that I have played under, it’s also been a challenge for the young guys coming in, It’s a hard task for them because they get judged by playing Test cricket in these conditions where you have found that even our experienced players have found it tough. We have to keep motivating them and to keep the spirits high.

Ravichandran Ashwin (Defending Mohali pitch): Honestly I think it's the batting that makes the wicket look what it is. I don't know if any Indian journalist knows the name of the curator in Johannesburg, Port Elizabeth, but we seem to get a hang of Daljit Singh [the curator in Mohali] very quickly. Ashwin also had a Twitter spat with Rodney Hogg.

@RMHogg@ICC@BCCI sure,let's just share the same mirror or should I order two??

Amit Mishra (Speaking to mediapersons): We have not been given due credit with so much talk about the pitch. Our achievements should have been highlighted more and talked about. Our home conditions have been like this for last 15 years and it is not from today. When we went to Sri Lanka, we got turning tracks there and bowled well.

This wicket is diabolical!! 9 legitimate wicket chances in the first hour with 3 plays and misses every over! #day2#minefield#INDvSA

Glenn Maxwell on Twitter: This wicket is diabolical!! 9 legitimate wicket chances in the first hour with 3 plays and misses every over! #day2 #minefield #INDvSA