In a way, it’s surprising that, of all teams, Pakistan have the best World T20 record. After all, they aren’t renowned for their consistency. They were finalists in 2007, champions in 2009, and almost finalists again in 2010.

In a way, it’s surprising that, of all teams, Pakistan have the best World T20 record. After all, they aren’t renowned for their consistency. They were finalists in 2007, champions in 2009, and almost finalists again in 2010. Pakistan’s success proves that they have taken to this format of the game very well. The flamboyance in their side suits T20 to a tee. Their opponents in their first game now have back registered back to back wins in sub-continent conditions. They beat India in a close game in Chennai before flying into Sri Lanka, and in their tournament opener against Bangladesh, they ensured there was no slip-up, as some had predicted. 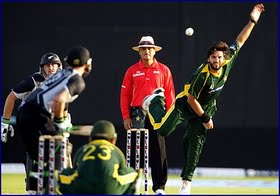 On paper, Pakistan possess the strength to conquer New Zealand. Their spinners, in particular, would believe they can deliver the killer punch. Saeed Ajmal may not have won any awards at the ICC function, but he remains among the best bowlers in world cricket in any format of the game at present. His variations have troubled the best of sides, and New Zealand, as it is, aren’t considered great players of spin. The second spinner in the side, Shahid Afridi, is also equally seasoned. Variation in the bowling styles of the two is what makes them dangerous. If the off-spinner has the doosra to go with his regular deliveries, the leggie’s fastish flippers are hard to pick. Not to forget, Umar Gul is also a heralded T20 pacer.

If anything can hurt Pakistan in this tournament, it is their legendary inconsistency, evidence of which was on display during the warm-ups. While they managed to chase down 186 against India, they failed to reach 112 against England. This is one area where Pakistan continueto be susceptible. To overcome the same, they will bank on their experienced men in the batting order. Skipper Mohammad Hafeez will have a key role to play, as will the other opener Imran Nazir, and the other big names like Kamran Akmal, Shoaib Malik and Abdul Razzaq. These players have been around long enough to know what’s expected of them.

Brendon McCullum has now played two match-winning knocks in a row. He registered a 90 plus score in India, and killed Bangladesh’s hopes with a typically attacking knock in his team’s tournament opener. It is no secret that, in T20s, New Zealand’s fortunes heavily depend on McCullum. This, in a way, makes him the team’s strength as well as its weakness. When McCullum succeeds like he has in the last two games, the Kiwis rarely struggle. On the contrary, when he fails with the bat, New Zealand hardly manage to recover. It is thus significant that the other players in the side also play a more defined role than just passing on the strike to McCullum.

A lot will be expected of skipper Ross Taylor from this series. He is one man who, like McCullum can turn around a game in a matter of minutes. New Zealand also need to find a way to deal with Pakistan’s spinners. The likes of Martin Guptill, Rob Nicol and Kane Williamson will be tested for sure.