Misbah demonstrated why he is so highly rated

Out of favour Pakistan all-rounder Abdul Razzaq may have stated that Misbah-Ul-Haq is responsible for the ills in Pakistan cricket in recent times.

Out of favour Pakistan all-rounder Abdul Razzaq may have stated that Misbah-Ul-Haq is responsible for the ills in Pakistan cricket in recent times. His theory however would not find many takers after Misbah batted splendidly against West Indies to play the most significant part in Pakistan’s victory against West Indies in the Caribbean. After three game in the series, both sides had an equal chance of winning the series, but the Pakistan captain came up with impressive batting performances in the last two matches to turn the tide in Pakistan’s favour.

Misbah’s scores in the series tell the story of his brilliance. He began with a sedate half-century in the opening match of the tournament. Although Shahid Afridi dominated the match, Misbah’s partnership with Afridi was extremely crucial in the context of the game as Pakistan had lost their top five very soon. Misbah failed in the only game that Pakistan lost in the series, which proved how important the skipper has become to the team’s fortunes. Misbah made only 17 in the second game, as a result of which Pakistan collapsed chasing even a mediocre score, and succumbed to defeat. 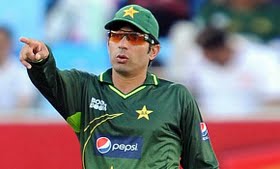 The Pakistan captain’s brilliance was clearly on show in the last three matches. His 75 in the third ODI ensured the team had a decent target to bowl on. The bowlers almost pulled off an improbable victory for the visitors before Jason Holder stole their thunder by using the long handle to great effect. Pakistan could have been demoralised by the tie. Instead, the psychological loss only inspired Misbah to do even better in the last two matches. His unbeaten 53 off 43 balls while chasing a rain-revised target demonstrated that he can change gears when needed.

Also, when the most important clash of all came, Misbah was again ready for the challenge. His fourth half-century of the series guided Pakistan to a much-needed series triumph in the aftermath of the Champions Trophy debacle. Razzaq may have rated Misbah as a negative player, but over the course of his career the veteran has often proved that he can play as per the demands of the situation. This series was no different. If at all, Misbah has had to be extra cautious over a period of time, it has been purely because the rest of the batsmen have been so poor.

While Misbah was majorly responsible for Pakistan’s triumph over the Windies, it was good to see some of the others also putting their hands up over the course of the series. Afridi kicked off the series on a special note before tapering away. Nasir Jamshed, Mohammad Hafeez and Ahmed Shehzad all scored crucial half-centuries in different games to back up their skipper. With the ball, Mohammad Irfan, Junaid Khan and Saeed Ajmal made their marks albeit in phases. At the end of the day, Pakistan had enough gumption to overcome the insipid West Indies, who struggled both with bat and ball.